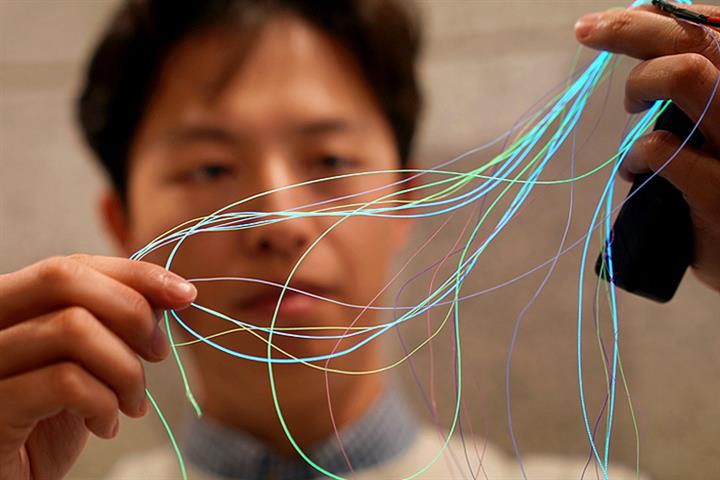 (Yicai Global) March 11 -- A team from Shanghai’s prestigious Fudan University has developed a 1.5-meter-square, fully bendable and washable fabric that can display images, according to a recent research paper.

The six-meter-long, 25-centimeter-wide piece of cloth contains five sets of 105 electroluminescent units spaced 800 micrometers apart, effectively weaving a display screen into the fabric, according to a paper published in British scientific journal Nature on March 10.

The team has, after ten years of trial and error, developed a fabric interwoven with electroluminescent units that can serve as a display screen through effective circuit control, team leader Peng Huisheng, who is a professor in the department of macromolecular science, told The Paper.

The possibilities are mind-boggling. It means that display screens could soon be ‘worn’ by the user. For example, polar explorers who can’t easily whip out a phone in freezing conditions can instead ‘wear’ a navigation map and click on their clothes to display real-time location information. People with language barriers can also use it as a communication tool.

There are still many obstacles to the research and application of flexible display fabrics, Peng said. But with more government support, people will put more effort into the area and the problems will gradually be resolved.