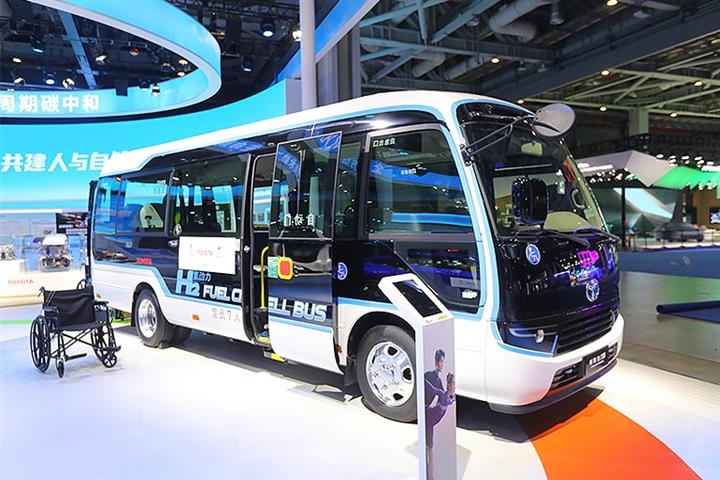 Firms such as automation giant Honeywell International and conglomerate Fujifilm Holdings are displaying their green technologies in the Low-Carbon Energy and Environmental Protection Special Exhibition Zone of the annual expo in Shanghai.

The trend is supported by the government. China said in September 2020 that it will strive to achieve carbon neutrality by 2060 after having its carbon dioxide emissions peak by 2030.

North Carolina-based Honeywell brought its automation equipment and new materials to the trade event to help companies in the sectors of aviation, manufacturing, and logistics to reduce their emissions.

Honeywell has committed to achieving carbon neutrality by 2035, Xiao Jin, chief technology officer of Honeywell Aerospace in China, said to Yicai Global. The company’s products and facilities have cut emissions that cause global warming by 90 percent since 2004, the CTO added.

Change requires product innovation. A refrigerant developed by Honeywell decreases greenhouse gases by more than 200 million tons every year, which is equivalent to that of 42 million cars per year, according to Xiao.

The Universal Beijing Resort, a theme park that opened last September, uses the above-mentioned working fluid found in air conditioning systems. The product should limit the venue's carbs dioxide emissions by 70 percent in comparison to using other refrigerants.

Japanese multinational corporation Fujifilm was also seen in the same special zone. The Tokyo-headquartered firm is displaying its magnetic tape data storage system which beats the capacity of a solid-state drive dozens of times.

In the Big Data era, companies usually have huge amounts of data to be stored and 70 percent of that are "cold" and do not need to be read frequently, a Fujifilm staff member said to Yicai Global at the expo.

Magnetic tape can store data for 50 years, whereas a hard drive has a life cycle of five to 10 years, so magnetic tape reduces waste by 80 percent, the person added.

In the exhibition zone of automobiles, French tire giant Michelin was showcasing its hydrogen fuel cell racing car. The zero-emission vehicle uses a fuel cell jointly produced by Michelin and automotive supplier Faurecia. The car is expected to debut at the 24 Hours of Le Mans, an endurance-focused sports car race, in 2025.