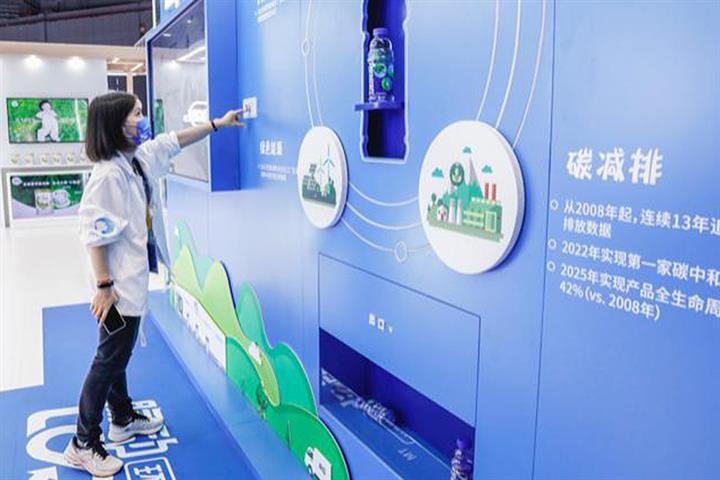 (Yicai Global) Aug. 3 -- The so-called circular economy will drive Shanghai’s industrial development toward achieving China’s carbon neutrality goal, according to an action plan the municipal government published at the end of last month.

Under the plan, the recycling rate for major waste in Shanghai will be about 92 percent by 2025, with efforts to achieve zero solid waste in landfill, while the rate for household waste will hit 45 percent, and the recovery rate of resources will top 85 percent.

A circular economy, one in which products and materials are shared, reused, repaired, and recycled to cut waste, has begun to take shape in China. According to a report by Tsinghua University's Institute of Energy and Environmental Economics and others, the value of idle goods transactions in the country is expected to jump to nearly CNY3 trillion (USD444 billion) by 2025, after hitting more than CNY1 trillion in 2020.

Shanghai has set a bigger-than-expected target to cut its carbon dioxide emissions to achieve the national 2030 goal for peak emissions, according to the plan released on July 28. The city will cut its carbon footprint by 70 percent per unit of regional gross domestic product by 2030 from 2005’s level. The national requirement is for a 65 percent reduction.

The entire country is thinking about ways to become greener after President Xi Jinping said in 2020 that China targets peak carbon emissions by 2030 and carbon neutrality by 2060.

A consumption-oriented city like Shanghai should force the transformation of production and manufacturing through green consumption to build a recycling-based society and support carbon peaking and carbon neutrality, Du said.

Shanghai produces nearly 30,000 tons of waste a day, of which plastics with low added value account for 20 percent, Du noted, adding that if the city actively promoted the recycling of related resources, carbon emissions from the production of plastics and other related processes would be greatly reduced.

Shanghai also aims to promote the circular transformation of industrial parks, with key parks treating solid waste on site by 2025, according to Xiu Guangli, director of the School of Resources and Environmental Engineering at East China University of Science and Technology. That would require an industrial chain for waste recycling in these areas, improving their circular development, he added.