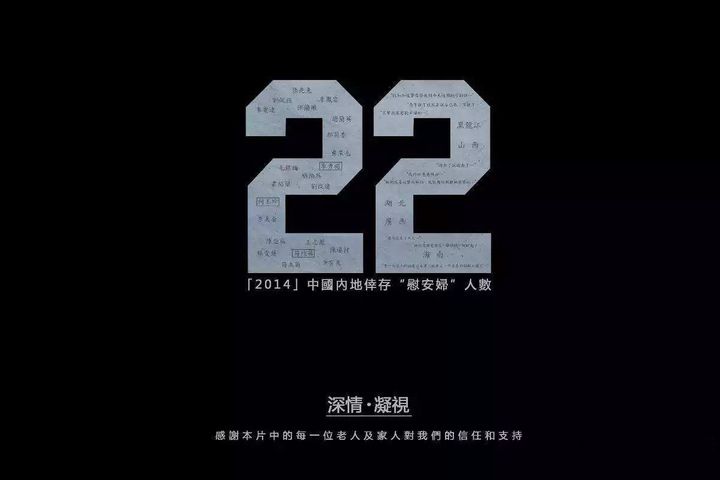 (Yicai Global) Aug. 18 -- Of all the ways to shoot a movie about 'comfort women,' director Guo Ke chose one of the most peaceful ones.

His documentary, Twenty-Two, lacks profundity and depth, critics said. Guo's limited ability did not do justice to the seriousness of the movie, which is the sequel to his Thirty-Two, some said.

"I don't understand why it lacks profundity," the 37-year-old film-maker told Yicai Global. "They are in their nineties. What does it mean to be 90 years old? It means that you'll live another 70 years before you reach that age. Don't you think it's a very profound experience when you see a bunch of 90-year-olds who have been through very traumatic things in front of you?"

"The movie tells people what kind of person I am," Guo said. "I'm not saying that I just made a great movie, but I put my heart and soul into it."

Twenty-Two had grossed over USD7.48 million (CNY50 million) as of noon yesterday, the fourth day since it was released. Getting a ticket to the movie was difficult sometimes, and its success has demonstrated demand for documentaries and evoked comparisons to Wolf Warrior II, which recently became China's highest grossing movie.

Guo does not care much about box office takings and asked about how his film was received. "Were there many people in the cinema when you watched it? What were their reactions like?" Guo did not expect his movie to be a box office hit and hoped to merely to break even. Now that it has started to profit, he always says he is very grateful. "I'll donate all of my share of the profit," he said. "I'll do it, be it ten million or a hundred million yuan."

Guo has decided to donate part of the profit to a Chinese 'comfort women' studies center managed by professor Su Zhiliang, a historian who has been studying issues related to 'comfort women' since 1992. He was an academic advisor to the film's crew and has known Twenty-Two's subjects for more than 10 years. He was a great help during production.

Please put 'comfort women' in quotation marks, Guo and Su said repeatedly. Many learned from Twenty-Two that they should refer to these women as victims who were forced into working as 'comfort women' during World War II. "[They] were actually sex slaves for the Japanese army," Su said.

'The World Is Such a Lively Place'

The documentary shows the day-to-day lives of 22 'comfort women' who survived and went on to reside in mainland China. Instead of denouncing the war as the cause for their sufferings, Twenty-Two focuses on how they ultimately led seemingly ordinary existences. The movie was shot two years ago. Some 14 of the women are alive today, Su said, although other sources indicate only eight are.

"Some of the old ladies are not shown in the movie. They didn't want to face the camera, or be seen in the media." Unlike other war survivors, most 'comfort women' prefer to stay silent.

Guo read a story about a Chinese 'comfort woman' and her son online in 2012. It struck him as an extraordinary story that would make a good movie. At first, he wanted to make a drama based on it and went to Lipu county in Guangxi to find the heroine, a 92-year-old Yao lady -- Wei Shaolan. He got limited funding from investors and had to make a documentary instead to keep costs under budget. Back then, there were 32 surviving 'comfort women' in China, hence the first movie's title -- Thirty-Two.

The Japanese army besieged Guilin (Guangxi) in 1944. Wei, then 24, fled the city carrying her one-year-old daughter on her back. She was captured by the Japanese and kept in a blockhouse for three months, where she stayed with her daughter all the time. She eventually managed to get back home, only to find that she was pregnant with a Japanese soldier's child. She tried to kill herself, but her neighbors saved her. "You must keep the child be it a boy or a girl, just in case you become infertile," her mother-in-law told her. Her son was born in 1945, and she named him Luo Shanxue. Her son is still single. Matchmakers introduced him to six girls. They turned him down because of his Japanese ancestry. Local villagers treated him differently throughout his life and called him "son of the Japanese."

"The world is so lovely, and I don't want to die," Wei said. "The world is such a lively place, why would I want to die? No way. I'll live even if I have to eat wild herbs." Many who watched Thirty-Two or Twenty-Two were deeply impressed by the old Yao lady. She has gone through some of the most traumatic things imaginable, but still thinks that life is beautiful. She smiles like a child when she talks about her teenage years, when she herded cows and learned folk songs from old people from neighboring villages. Her perseverance and optimism changed people's perception of 'comfort women.'

Seeing Wei gave Guo determination to make a documentary about the victims. His second documentary, Twenty-Two, was named for the 22 survivors who were still alive in 2014. After being around the elderly for a long time, Guo felt more like one of their juniors rather than a director around them and he became increasingly reluctant to touch their hearts because they have wounds that will never heal. "Do not mention it anymore," "I do want to talk about it," "I feel uncomfortable," some of the women said in the documentary. So, Guo took their feelings into account and stopped asking them about their past experiences.

Guo thought that pursuing the truth was not more important than caring about them, because the truth is too obvious. Rather than place blame, Guo wants to showcase the women's continuing lives, respect and understanding.

"Why do we have to pursue the truth which actually lies in their hearts? Isn't it true that the pursuit of the truth means digging out their pain? What we should think about is how to protect them and care for them. If you think of them as members of your family -- if your own grandmother had suffered those experiences, what would you do? Would you look for the truth or let her spend the rest of her life pleasantly?"

Huang Youliang of Yi ethnicity in Hainan passed away on August 12. Huang left an impression on Guo of being quiet. "She did not like talking, and stayed in bed every day, seldom getting out of the bed to do physical activities," he said. She talks less than other old folks, a reporter who once visited her said. Huang was the last 'comfort woman' plaintiff in mainland China. She sued the Japanese government in a local Tokyo court and in 2010 the third trial ended. She lost.

"When she passed away, at least I did not feel guilty," Guo said. "I did not dig out her pain or reveal it to the public. Though the bystanders may not have too much feeling as [the 'comfort women'] pass away, I always ask myself whether what I have done is right whenever I face the matter."

In Twenty-Two, 'comfort women 'is not just two words as it appears in history books. The 22 women are portrayed as the human beings they are, worthy of being remembered, understood and respected.

Su told Guo very frankly that the film does not have much historic value and that its significance is that it records the daily life of the elderly as well as their thoughts.

Mao Yinmei is an old Korean woman. She was originally named Piao Cheshun, but changed her name. Her home town is in Pingandong, North Korea. During World War II, someone introduced her to work in China, and she was tricked into going to a 'comfort station' in Wuhan. After the war ended, she got married to a Chinese farmer. As she couldn't bear children, they adopted a daughter. Her life as an old woman is quiet and serene. Guo was very awestruck by her. Mao is open-minded. She has grown many gardenias in her backyard. She gave each member of the film crew a flower and pinned it on their clothes. She treated them well. Her saying "welcome" and "please have a seat" in Japanese in the film reveal she has memories from a hard part of her life. Many viewers want to cry when she sings the Korean songs Arirang and Doraji.

On one occasion, Su asked if she still remembered her native dialect. "She still remembers some word and she can't forget the accent of her hometown. She said that if she forgot the accent, she would not be able to return home to see her parents. So, she has been practicing the pronunciation throughout her life. In the end, she never went home. Can you say her life is nothing special?"

The funerals of Chen Lintao and Zhang Gaixiang, two seniors from Shanxi, appear in Twenty-Two -- one in the opening, the other in the ending. In a village obscured by curtains of snow amidst howling wind, the tombs appear desolate after mourners left. The winter goes and the spring comes, as if nothing ever happened here. With the death of each old man or woman, history becomes a bit blurrier.

"We pretend that all these will only happen once at a particular point of time," said Alan Reynan, the director of Nuit et Brouillarda, a movie depicting Auschwitz Nazi atrocities. "We turn a blind eye to things around us and a deaf ear to incessant cries of human nature."

Guo is not going to shoot another documentary on elders and simply wants to keep them company. "I think Twenty-Two is very comprehensive already," he said. "I should stop here for they have been pictured in their most beautiful years. I think it is wonderful and I am lucky. I only wish to care and protect these elders in my way and look at them with affection for the last time."