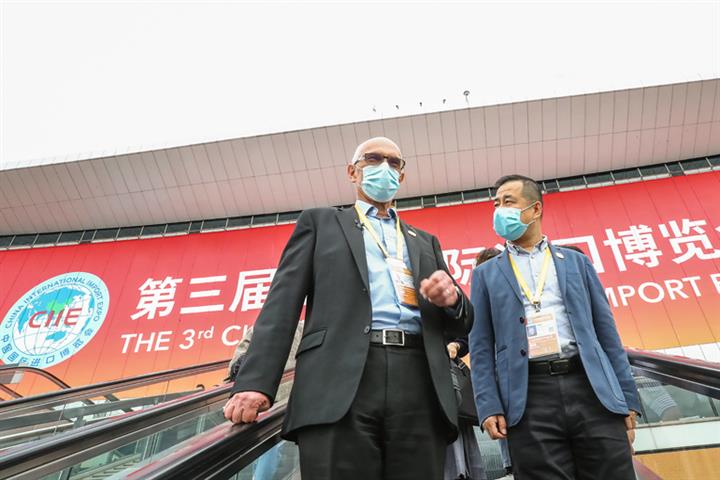 (Yicai Global) Nov. 10 -- The 3rd China International Import Expo arranged online interviews for overseas company agents unable to visit China due to Covid-19. Executives of 13 multinationals of the ilk of L'Oréal, Elekta, United Overseas Bank and Dole Food who sat for these interviews all said the CIIE is a great opportunity and voiced optimism about their future growth in China.

The country is one of Elekta’s most important markets in the world. One of the company’s production lines is in London, while the other is in Beijing. Elekta will invest more in research and development and innovation in addition to production, such as setting up a training innovation center and a Shanghai software R&D center. It will also collaborate with Chinese startups to produce equipment parts, said Ioannis Panagiotelis, chief marketing and sales officer and executive vice president of the leading Swedish clinical radiotherapy treatment leader.

France’s L'Oréal held to 20 percent growth from January to September as Chinese consumer demand remained constant, said Jean-Paul Agon, chief executive of the Hauts-de-Seine-based world’s top cosmetics company. He also expressed full confidence in its China business, reprising a wish he expressed several years ago of turning the country into the firm’s largest market, a goal he hopes to attain soon.

China is steadily optimizing its overall business environment, said Christian Wiegele, president of Dole’s Asia Fresh division. The company mainly distributes and sells imported fresh fruits. The inspection and clearance of some of its products have been fast-tracked with the support of China Customs, thus lessening the likelihood of quality issues arising. These streamlined procedures are very convenient, he added.

China introduced its “dual circulation” strategy at just the right time. With internal and external interaction, the approach will not only bring trade, investment and capital flows to China, but also to the world, said Suan Teck Kin, head of research at United Overseas Bank. The country’s growing ranks of middle-income earners and cross-border flows have brought many business opportunities to foreign banks, including the Singapore-based financial institution for which he is also executive director.

Under the “dual circulation” strategy born from trade frictions with the US, China will stress swifter technological progress at home while boosting consumption, urbanization and supply-chains. It may undertake fewer Belt and Road projects and invest less abroad, but the plan does not envisage sealing off its economy.