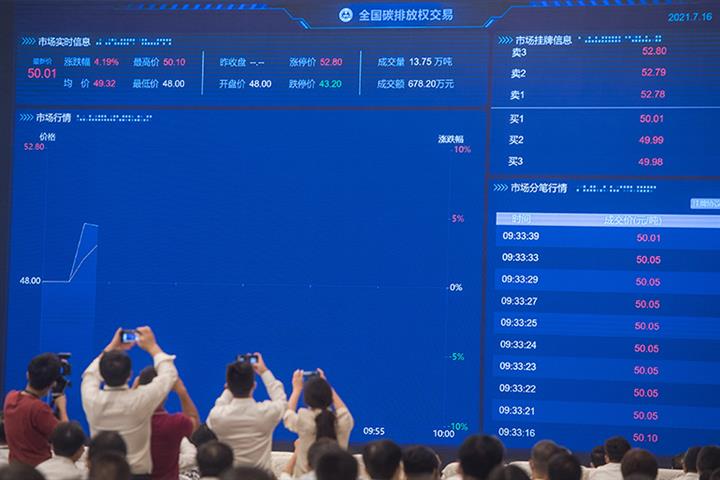 (Yicai Global) March 9 -- China should speed up the creation of a legal framework for carbon emissions trading and set unified rules in order to reach its peak carbon emissions and carbon neutrality goals, members of the National Committee of the Chinese People's Political Consultative Conference have proposed.

China should enact carbon emissions trading laws, set up a market for trading under unified regulation, and establish unified venues for trading, registration and settlement, according to Lyu Hongbing, a CPPCC representative and chief managing partner at Grandall Law Firm.

Nan Cunhui, a standing member of the CPPCC National Committee and chairman of Chint Group, suggested the country issue regulations to improve legal control of the carbon trading market. The emissions quota should also be tightened and a quota auction system is needed that takes into account the ability of businesses to honor an agreement and the cost of cutting carbon emissions, he said.

China needs to formulate a more complete verification system for carbon emissions inspection reports, according to Li Yonglin, a CPPCC member and deputy general manager of China Petroleum and Chemical. There should be more scientific ways to measure data and tougher oversight of third-party verifiers, Li added, as well as harsher penalties for data fraud to ensure fair trading in the carbon market.

China began an online carbon emissions trading scheme last July. Trading totaled 186.7 million tons, worth CNY8.1 billion (USD1.3 billion), as of Feb. 17, according to data from the Ministry of Ecology and Environment.