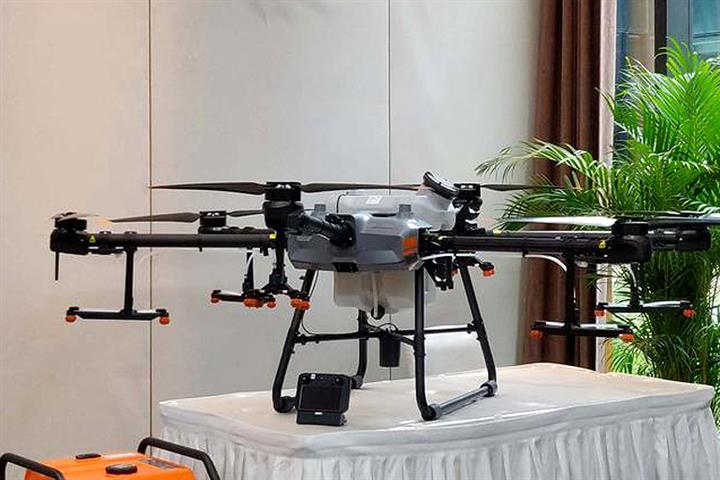 (Yicai Global) Nov. 10 -- DJI Agriculture, an arm of Chinese drone giant DJI Technology, released the T30, a giant crop-spraying drone that can cover an area one third greater than previous models, at its DJI Fusion event in Shenzhen yesterday.

The heavy-duty T30 can spray 16 hectares an hour, carry loads of up to 30 kilograms and is equipped with a new plunger pump that has a spray range of nine meters. It costs CNY29,999 (USD4,539) and is suitable for use on large farms.

It also unveiled the T10 which at CNY19,999 is the cheapest in its range of agricultural drones. Small and lightweight, it is an entry level drone that can be used for smaller plots.

“Only by lowering the prices can DJI attract more young people, especially those in rural areas, to use drones,” said Chen Tao, director of global marketing and sales.

The modernization of farming methods in China is gaining pace. DJI’s agricultural drones, which can be used to sow seeds as well as spray fertilizer and insecticides, worked on around 33 million hectares this year, more than double the area covered last year, Chen said. The firm sold 40,000 drones for agricultural use last year.

DJI will also turn its attention to the overseas market despite the ravages of the Covid-19 pandemic. The international market has great potential, especially Southeast Asia and Latin America, Chen said. Many countries in Southeast Asia have a similar environment to China and a lot of Chinese immigrants, so it is easier to promote the firm’s products there, he added.