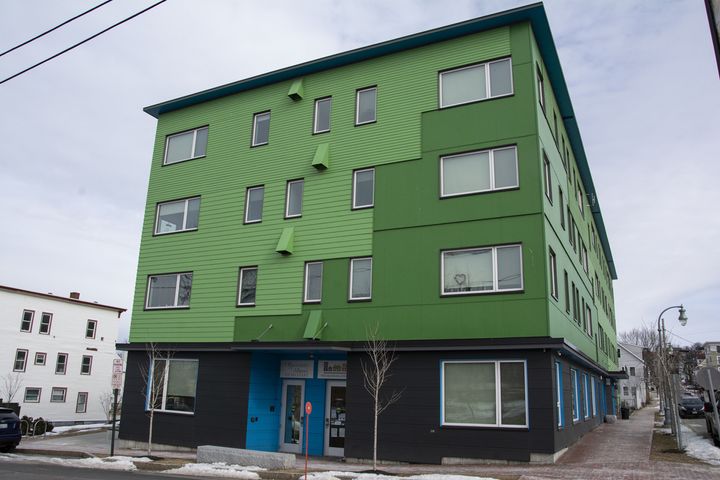 (Yicai Global) June 26 -- Rubbing their hands and breathing dragon smoke into the cold air, residents rush inside the bright green building. The temperature outside has barely hit double digits Fahrenheit, so the warm lobby inside Bayside Anchor, a low-income apartment building in Portland, Maine (United States), is a happy reprieve.

The lobby is also an architectural feat, as Bayside Anchor has no centralized heating system. It is a certified "passive house," which means the building has airtight insulation and thick windows to keep the interior warm and heating costs low.

Passive house-certified buildings are slightly more expensive to build upfront, but the heat and electricity bills are less than half of what it typically costs to heat a similar building in Portland.

Passive house design is more than just an architectural novelty, says the team behind Bayside Anchor. It is also a necessary tool for residents or homeowners who care about long-term affordability. As the need for affordable housing grows across the United States, proponents say cities should move beyond building low-income housing as cheaply as possible.

"In the affordable housing sector, this kind of forward thinking is critical," says Greg Payne, director of the Maine Affordable Housing Coalition and development officer at Avesta Housing, the nonprofit affordable housing provider that manages Bayside Anchor. "We have to promise that [the building] will be affordable for 45 years."

Before moving to Bayside Anchor two years ago, M.D. Islam, his wife, and their two young children lived in a home without heat.

"We had to suffer a lot," says Mr. Islam, who works at a local recycling plant. "Now my family – everybody – is happy. We feel very comfortable."

A high-tech ventilation system exchanges indoor air with fresh air from outside, all while retaining the temperature of the indoor air. Thick walls (with 10 inches of insulation —or 25 cm—in Bayside Anchor's case) and triple-pane windows keep the building airtight so very little heat escapes. Instead of a central heating system, each apartment has a small electric baseboard heater.

Combine all these elements, and you have windows that feel warm to the touch – even with outside temperatures well below freezing.

"Sometimes we turn off the heater because we feel so good," says Mr. Islam.

In addition the building aims to be an "anchor" for the community. The first floor has a colorful common space, as well as a Portland Housing Authority office, a Head Start preschool, and a community policing office. Mr. Islam also raves about the help he receives from the staff at Bayside Anchor, such as Avesta property manager Lucy Cayard.

Ms. Cayard says the passive house design has helped her build a deeper connection with the residents. Since much of the building takes care of itself, the building's staff can put their time and resources elsewhere.

"We get to focus more on people's needs and not the building's needs," says Ms. Cayard. "When we don't have to go into their apartment for maintenance, we can spend that time getting to know them."

The concept of passively heating and cooling a building is probably as old as architecture itself. Roman architect Vitruvius wrote about it in the first century B.C. The principles underlying Bayside Anchor's design are based on techniques honed by scientists in Europe in the 1980s and 1990s.

The building's 45 apartments – 36 of which target individuals and families making between $19,000 and $54,000 – are desperately needed by locals like Mr. Islam. As the city's first new affordable housing since the 1970s, Bayside Anchor is partially funded by the city and the state, but the development was jump-started in 2013 after the project won Enterprise and Deutsche Bank's "Lowering the Cost of Housing Competition," and a $250,000 investment.

It's not just Portland experimenting with this design. Philadelphia has long been considered a leader in bringing passive house standards to affordable housing. Village Centre, a 48-unit apartment building north of Portland in Brewer, Maine, is one of the largest passive house buildings in the country, and a building currently under construction in Boston could become the largest passive design office building in the world.

But with a national shortage of 3.7 million affordable rental homes, according to a report from the National Low Income Housing Coalition, new building approaches need to be explored. Almost 600 households are currently on the waitlist for one of Bayside Anchor's 36 affordable units.

"We are watching it happen all across the country," says Jesse Thompson, the Portland-based architect behind Bayside Anchor. "What's different about Maine is that it's the affordable housing folks who are the most progressive, who are moving the most quickly."