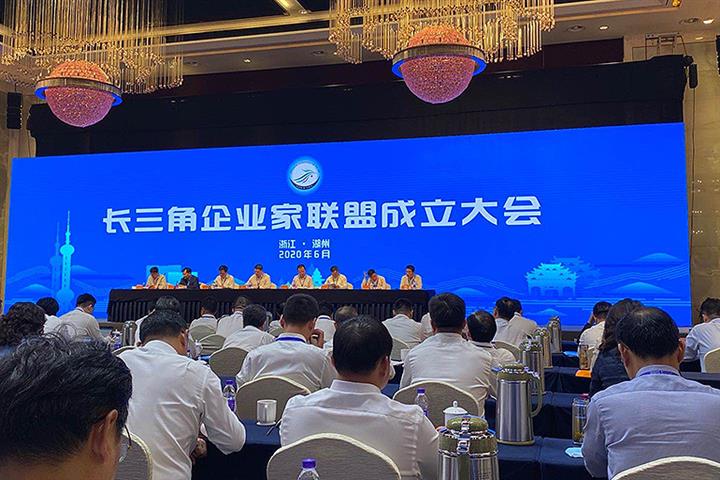 (Yicai Global) June 8 -- A group was formed this weekend to help build a world-class industrial cluster in one of China’s most economically developed areas.

The Yangtze River Delta Entrepreneur Alliance is packed with almost 100 heads of leading companies in key industries and chambers of commerce, such as Zhang Jindong, chairman of e-commerce giant Suning Holdings Group. It will serve as a communications bridge between entrepreneurs and the government as well as build platforms for collaboration on tech innovation and international exchanges.

The group will allow business people in the region to integrate elements in their firms’ upstream and downstream industrial chains, learn from each other and create collective brand influence, Liu Qingfeng, chairman of leading voice recognition firm iFlytek, said at its inaugural ceremony in Huzhou, eastern Zhejiang province on June 5.

The Yangtze River Delta region comprises Shanghai and parts of Zhejiang, Jiangsu and Anhui provinces and is one of China’s most economically developed and densely populated areas. In the first quarter, the region accounted for 24 percent of the country’s gross domestic product at CNY4.98 trillion (USD704 billion).

Companies outside the region are speeding up their positioning in the area. Internet giant Tencent Holdings, which is based in the southern city of Shenzhen, plans to locate its cloud, big data and artificial intelligence business in the Yangtze River Delta region, according to Zhang Lijun, vice president and general manager of the firm's East China headquarters.

Last week, Tencent began work on its AI supercomputing center in Shanghai’s southeast Songjiang district which is expected to start operations by the end of next year. The advanced informatization and density of institutions, colleges and universities in the region make it attractive, Zhang added.

The delta region will accelerate the opening up to and sharing with other regions and play an exemplary role in China’s regional integration development, said Zhang Jindong, who is also the alliance’s co-chair and initiator of its Jiangsu province group. The region will look to developed city clusters worldwide, grasp tech trends and improve its economic development through innovation, he added.

The region has the most industrial factors, most complete industrial chains and richest innovation resources of integrated circuits, AI and biomedicine in the country, Ma Chunlei, director of the Shanghai Development and Reform Commission, said at the second high-level forum on the Integral Development of the Yangtze River Delta held on June 6.

The region’s three provinces and one city will promote the deep integration of industrial chains to build a world-class industrial cluster in accordance with the central government’s requirements, he added.