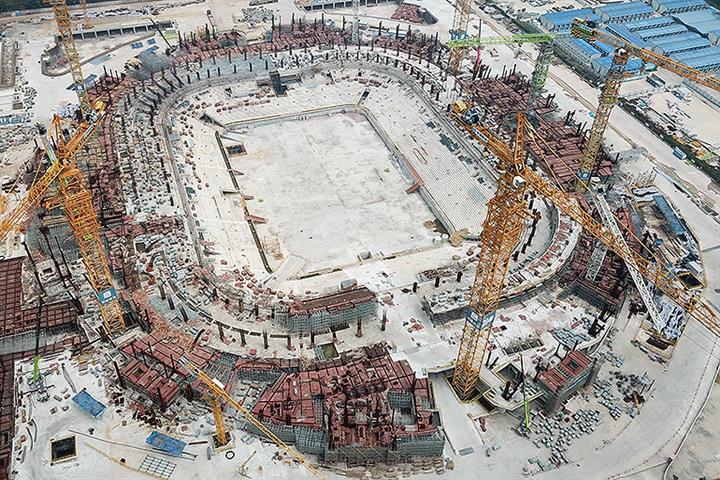 (Yicai Global) Aug. 5 -- China Evergrande announced that due to liquidity issues affecting the development and construction of the lot, the debt-laden property developer gave up the rights to use a piece of land in Guangzhou it acquired to build a soccer stadium for its soccer club Guangzhou Evergrande.

Evergrande signed a termination agreement for the land in the Xiecun area of Panyu district in Guangzhou with the transferee Guangzhou Municipal Planning and Natural Resources Bureau on Aug. 3. The latter will refund the company CNY5.5 billion (USD815 million), resulting in a loss of CNY1.3 billion for Evergrande.

The proceeds of the refund will be spent to resolve debt issues directly related to the land, including the payment of the guaranteed debts that Evergrande owes to Citic Trust, the unpaid construction costs, expenses related to the project, and other fees.

Yuyao Real Estate Development, a unit of the Guangzhou-based developer, bought the 500,000-square-meter land, which includes a 300,000-sqm constructible area, in April 2020 for CNY6.8 billion to build a soccer stadium.

Guangzhou Evergrande Football Stadium, which would be built according to the world’s highest standards, received a total investment of CNY12 billion (USD1.8 billion), Xia Haijun, vice chairman of the board of China Evergrande, said at the time, adding that it could accommodate 100,000 people. It was planned to be completed and put into use by the end of 2022, Xia noted.

In September last year, social media rumors claimed that Evergrande could no longer afford to continue to support Guangzhou Evergrande Football Club, and it was seeking government help instead.

Although Evergrande never confirmed the rumors, it is true that Guangzhou Evergrande Football Club has been losing money. From 2013 to the first half of 2020, the total loss of the club exceeded CNY8.6 billion. Trapped in a financial crisis, Evergrande is definitely unable to support it.