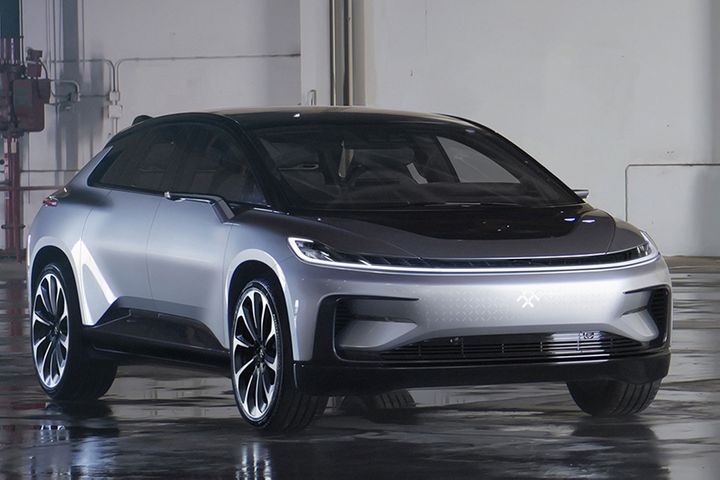 Faraday Future Shows Off Flagship FF91 at CES; Car May Be Available at Year-End

(Yicai Global) Jan. 7 -- Two of Faraday Future's FF91 concept electric vehicles are currently parked outside the Consumer Electronics Show's main venue in Las Vegas. Subject to funding, the cars could hit the market at the end of this year.

One of the vehicles was personally delivered to the CES by Chief Executive Carsten Breitfeld from the automaker's headquarters in Los Angeles, tech website 36Kr reported. The CES, the world's premier annual tech event, started today and runs through Jan. 10.

Featuring a 130-kilowatt hour battery park made by South Korea's LG, the FF91 boasts a range of 596 kilometers, one of the longest for any electric vehicle. But mass production of Faraday Future's first car has yet to start. Despite being in the pipeline for several years, the company still needs to raise around USD850 million to finance delivery, Breitfeld said in October. Pricing is expected to be around CNY2 million (USD288,500) in China and USD200,000 in the US.

In comparison, Tesla began delivering its Model 3 sedans to Chinese consumers today. These are the first to roll off its Shanghai production line. With local government subsidies, the Model 3 is available in China for as little as CNY299,000 (USD43,110). The starting price for its classic Model S plug-in was CNY93,900.

Faraday Future has been tainted by the financial problems surrounding Jia Yueting, its founder and former chief executive. He ran up a mountain of debt as founder of Beijing-based internet firm Leshi Holding Group. In October, Jia filed for Chapter 11 bankruptcy in the US with a personal debt of more than USD3.6 billion. He has repaid USD3 billion of that, according to his debt handling team.