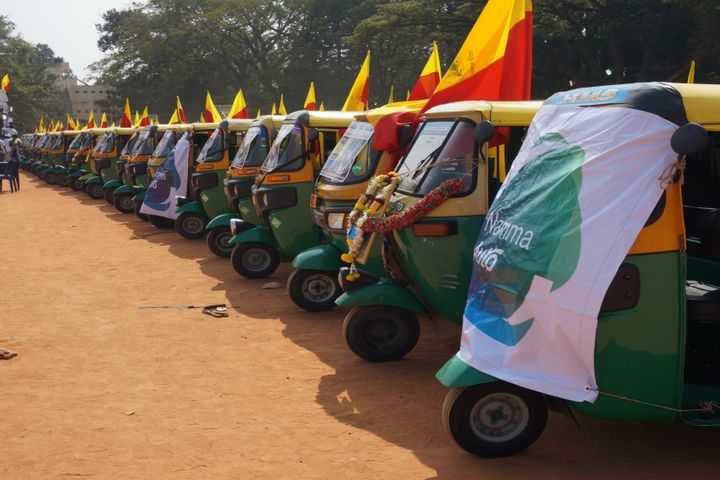 (Yicai Global) Dec. 3 -- Indian autorickshaw driver Narasimhamurthy R. will soon own the 200cc four-stroke engine three-wheeler with electric start that allows him to make a living. For almost two decades, this driver in Bengaluru (formerly Bangalore) had to rent his work vehicle. But eight months from now, he will make the final payment on a four-year loan he received from Three Wheels United India Private Ltd (TWU), a non-banking financial company that helps autorickshaw drivers to buy greener vehicles.

In 2015, a Three Wheels United field officer named Jayalakshmi approached the 45-year-old driver with an offer to help him purchase an autorickshaw with lower CO2 emissions than the one he had been renting. At first Narasimhamurthy declined the offer, but the saleswoman managed to persuade him. Three months later he signed up for TWU's 'Namma Auto' (Our Vehicle) financing programme.

In India, drivers who rent two-stroke autorickshaws generally earn the equivalent of less than eight dollars a day, but Narasimhamurthy now earns as much as 50 percent more, since four-stroke autorickshaws are more fuel efficient and incur lower maintenance costs. Once he finishes paying off the loan, his income will increase to the equivalent of nearly 15 dollars per day.

"Nearly 50 percent of autorickshaw drivers are forced to rent vehicles due to unaffordable financing options, therefore limiting their income and ability to choose a less polluting vehicle," says Cedrick Tandong, CEO of TWU. Bank rating systems for loans are ill-adapted to low-income drivers who have difficulty saving money and often have no banking history.

Autorickshaws provide a convenient and affordable alternative to inadequate public transportation in developing cities, and they have become popular in South Asian countries such as India, Bangladesh, Indonesia, Pakistan and Thailand. But they are highly polluting: a study commissioned by the European Union revealed that the total annual emissions from 120,000 autorickshaws in Bengaluru amount to 0.45 million tonnes of CO2, 1,445 tonnes of nitrogen oxide and 164 tonnes of particulate matter 10. While only around 20 percent of these autorickshaws are two-stroke vehicles, they are responsible for roughly 25 percent of total CO2 emissions and nearly 70 percent of PM10 emissions.

"One percent of India's over two billion tonnes of annual vehicular CO2 emissions come from autorickshaws. However, it is unrealistic to expect drivers who live on subsistence incomes to be concerned about reducing pollution, without first helping them increase their income," says Tandong.

A four-stroke autorickshaw costs around 175,000 rupees (nearly USD 2,400). TWU lends 150,000 rupees to drivers at an interest rate of 10.5 percent, while the drivers pay the rest upfront. TWU reaches out to driver communities directly through its team of 16 field officers and indirectly through partnerships with local nonprofits such as Women Health and Development (WHAD) and Payana, focused on social inclusion.

The Namma Auto programme goes beyond providing affordable financing. It encourages drivers to set aside 500 rupees (USD 6.8) per month by joining self-help groups of 15-20 drivers. The amount is then deposited into a group savings account at the Karnataka Namma Souharda Credit Cooperative.

"The interest obtained is loaned to the group's members at a two percent interest rate, capped at 10,000 rupees, in times of dire need — be it for children's school fees, house rent deposit or hospitalisation. Taking on joint responsibility releases the drivers from the clutches of moneylenders who give out loans at exorbitant interest rates of more than 36 percent," says Jayalakshmi, adding that in five years none of the groups she leads has ever defaulted on a loan.

Because TWU's credit rating system is designed for drivers, the company has a record default rate of less than one percent (down from 10 percent two years ago), whereas banks can experience 40 percent default rates for loans in the same category.

To help the drivers improve their daily income, TWU has also introduced them to cab-hailing mobile apps like Uber.

Three Wheels United was founded in 2014 by Dutch social venture Enviu, and since then, it has created an ecosystem of 15,000 drivers and financed more than 2,000 vehicles, mostly in the southern Indian states of Karnataka and Tamil Nadu. The company claims it has reduced CO2 emissions by approximately 22,000 tonnes. "By 2022, we hope to finance 11,700 additional vehicles, of which 25 percent will be electric," says Tandong. To achieve this, the company needs to raise around USD 130 million in new capital.

"We have partnered with Bangalore Metro Rail Corporation to provide one year of free parking and electric charging points, and Mahindra Electric Mobility [part of the Mahindra Group conglomerate] for their recently launched lithium-ion battery powered three-wheelers," he adds. TWU expects to finance 1,000 of these three-wheelers by March 2019.

The company had a turnover of USD 523,500 for the Indian fiscal year 2018 (April 2017 to March 2018) and hopes to reach USD 31 million by 2022. Meanwhile, the six million autorickshaws in India present the company with a lending opportunity of USD 13.8 billion, with an addressable market of 500,000 three-wheelers per year.