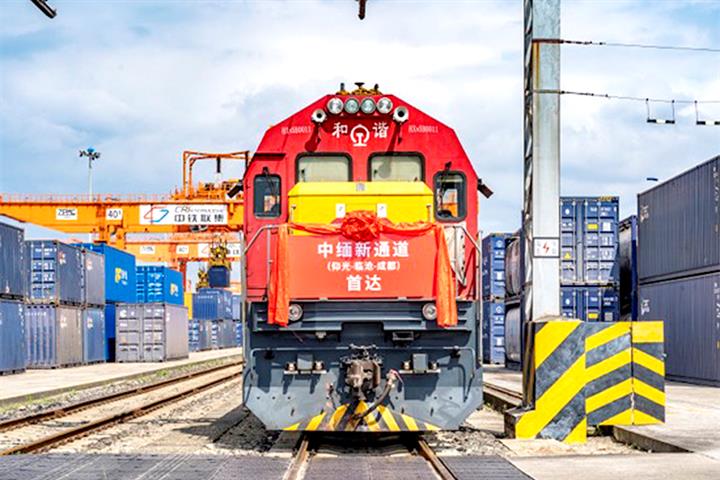 (Yicai Global) Aug. 31 -- The first cargo shipment has successfully made its way through a new time-saving land-sea corridor that connects southwest China with the Indian Ocean via a port in Myanmar.

The test shipment arrived in Chengdu, the capital of China’s Sichuan province, from Singapore after passing along the Yangon-Lincang-Chengdu logistics channel, Yicai Global learned. The route, which uses road, rail and sea transport, is expected to become southwest China’s third international logistics channel.

The route shortens journey times. Goods from Jebel Ali port in the United Arab Emirates, for example, can arrive in Chengdu or Chongqing, also in southwestern China, 27 days earlier if shipped via this route. Goods can be moved by road between Lincang in China’s southwestern Yunnan province and Yangon port in Myanmar in 72 hours and by railroad between Lincang and Chengdu in the same amount of time.

The next test shipments along the route, which is expected to become operational next year, will be divided into three batches, each of which will consist of 60 containers on one train wagon.

The route is still being tested and faces great difficulties, industry experts told Yicai Global, but it will play a vital role in forging closer economic ties between China’s southwest and the Association of Southeast Asian Nations.

ASEAN is China’s largest trading partner and the destination of the global manufacturing transfer. The region’s economy is rising and can complement the developing industries in China’s southwest. Yunnan, which borders on Myanmar, expects Lincang to become an important hub between the country and the Indian Ocean’s economic zone.

Southwest China has been making great efforts in developing new international logistics channels to overcome its geographical disadvantage of being far away from seaports. The China-Europe Railway Express and the new western land-sea channel via the Beibu Gulf began operating in recent years. The China-Laos Railway, the direct international freight train from Chengdu to Vientiane, is likely to open to traffic by December.