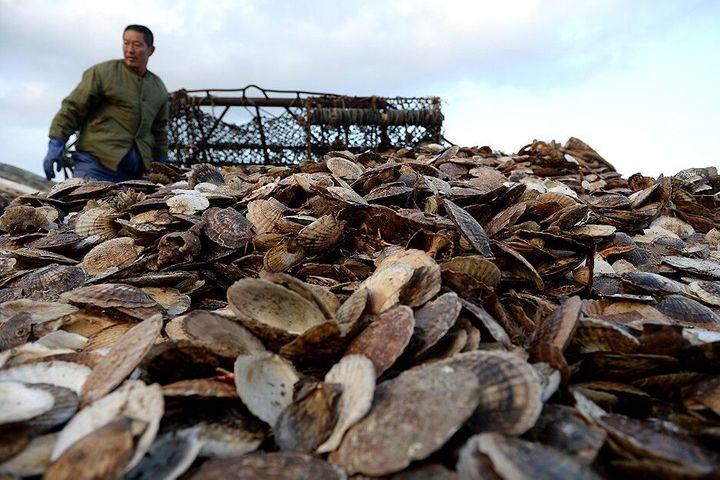 China's Zoneco Denies Trying to Pass Off Japan, SK Scallops as Its Own After Crop Failure

(Yicai Global) Dec. 20 -- Chinese aquaculturist Dalian Zoneco Group, which has found itself mired in a series of scandals, has denied media reports it bought large quantities of scallops imported from Japan and South Korea as raw ingredients and then fobbed them off as its own in its finished seafood products in a reply it sent to a query letter by the Shenzhen Stock Exchange.

The media claims do not comport with the facts, the company said in its response, adding that sourcing the goods from outside was just a normal business practice.

It also said that sales of the finished products with the outsourced raw ingredients represented a mere 3.73 percent of the firm's operating revenue in the first nine months, 2.64 percent last year and 1.95 percent in 2017 and the ones bought from Japan were an extremely small percentage of the whole, adding the company has never bought scallops from South Korea.

Zoneco only bought the scallops to stabilize its supply to the market and the profits on its finished products changed based on market fluctuations, with its gross profits being 17 percent in the first nine months, 9 percent last year and 14 percent in 2017, with no losses from these operations.

The company, which has reported repeated scallop crop failures in recent years, actually bought a large volume of imported scallops, processed and sold them at a loss as its own produce, The Paper reported on Dec. 17, citing insiders.

The company has procured the mollusks from Japan, South Korea, East China's Shandong province and other islands in the drawn-out chain strung in the Yellow Sea between China's mainland and the two Koreas where they are farmed. It sold the outside product below cost to guarantee its supply of the market in recent years, according to several other insiders. Zoneco also sells one-year scallop spats in purchased shells, fobbing them off as high-quality three-year olds, one employee said, per the report.

The shellfish are generally farmed via either 'hanging cultured,' using net rafts, or 'bottom cultured' -- sown directly on the seabed – methods the employee noted, saying Zoneco-grown-and-sold scallops are now all one-year raft-cultured ones.

Bottom-cultured ones are harvested every three years, but Zoneco has reported four large-area scallop losses over the past five years using this method, which is cheaper but slower than using rafts, since fewer plankton on which the bivalves feed are present at depth.

Zoneco reported the first mass die-off in October 2014, claiming bottom-sown scallops went missing because a cold water mass struck its aquafarm, wreaking CNY812 million (USD116.1 million) in losses in the first three quarters of 2014. The firm again reported three mass mortalities in January last year, and then in April and November when other islands were trumpeting bumper scallop harvests. Its net losses have totaled CNY2.1 billion (USD300 million) since 2014. The company's mysterious die-offs prompted the ouster of Feng Yuming, its chief executive. Shrimps have also escaped from or died en masse in its custody.

The company plans to give up its aquafarm of around 1,000 square kilometers because of the deaths and disappearances and change its sowing techniques, it announced on Dec. 13, and will also abandon farming of another around 1,000 square kilometers of affected seabed till late June 2020, it said in a statement last month, which should save CNY70 million (USD10 million) over the year. That is about 65 percent of the total seafloor Zoneco has the right to use.

In 2015, 2,000 residents of Zhangzidao island, after which the company was formerly named, jointly reported Zoneco made up the cold water mass claim, The Paper reported, saying the scallop failure was actually because Zoneco secretly pre-harvested the fan shells, adding that even spat procurement was tarnished by corruption and fabrication.

Zoneco was also investigated for illegal information disclosure in December last year and was found to have committed financial fraud, falsification of records and delayed disclosure of information after a 17-month investigation, China Securities Regulatory Commission said in a document in July. It imposed a life-long market ban on the firm's Chairman Wu Hougang and fined him CNY300,000 (USD43,000).

In the severest penalty the CSRC has ever handed down against a listed firm and its personnel under China's securities laws, another 23 executives or employees implicated were each fined between CNY30,000 and CNY30,000 and the firm's executive vice president, board secretary and chief financial officer were also banned from the stock market for between five and 10 years.

Zoneco was formerly Zhangzidao Group but changed its name in 2016 to avert de-listing under bourse rules after logging two years of losses in a row, the Seafood Source reported.

Timeline of the Zoneco Saga

The company announced the first anomaly with its scallop stocks in October 2014 and was forced to write these off to the tune of almost CNY800 million (USD115 million).

Zoneco again announced an irregularity in January last year, this time scrapping CNY630 million in stocks. It cited a shortage of food that starved the fan-shelled bivalves to death as the cause. The firm stated this scallop apocalypse inflicted on it a net profit losses of CNY43.14 million in its first-quarter report.

In July, Wu Hougang, chairman of Zhangzidao, was fined CNY600,000 by the China Securities Regulatory Commission for alleged information disclosure violations and slapped with a life-long market ban.

Zoneco was charged with collecting sea cucumbers during the no-fishing period in August, but the company denied these allegations.

Zoneco once again reported a mass death of scallops worth over CNY300 million, which posed a risk of inventory impairment. The cause of this mass mortality is as yet unknown.