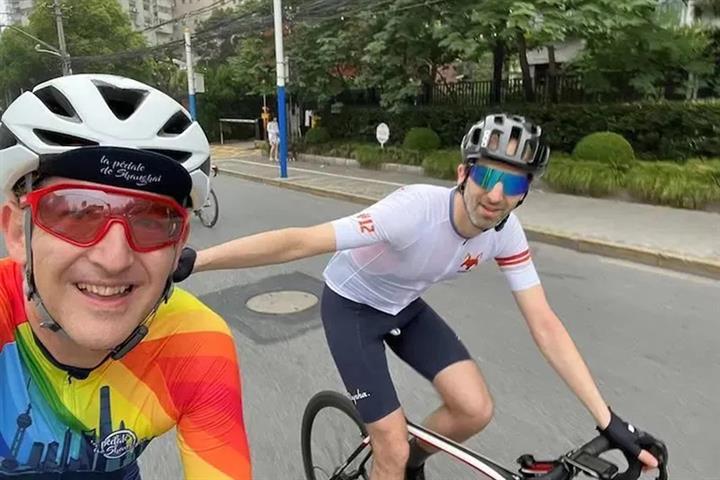 (Yicai Global) Nov. 8 -- A Frenchman who has cycled more than 30,000 kilometers across China has seen his career go from strength to strength in the country and he now serves on the board of managing directors at German management consultancy firm Roland Berger.

Denis Depoux first came to China in 1993 with French energy giant Électricité de France. France and China have a long history of cooperation in the field of nuclear power, and in the early 1990s, EDF was providing technical support for the Daya Bay Nuclear Power Station in southern Guangdong province.

“I was struck by the contrast between the remote village where Daya Bay Nuclear Power Station is located, which didn’t even have electricity, while the country’s most advanced nuclear power plant was being built just a few kilometers away,” Depoux told Yicai Global.

After working at Daya Bay for several months, Depoux backpacked to Tibet on his own by bus. It was a difficult journey over treacherous terrain. “At the time, they told me that the government was planning to build a railway between Golmud in western Qinghai province and Lhasa. I thought the distance was huge, but 15 years later, the railway has indeed been constructed, which is really remarkable,” he said.

Gripped by a fascination with the country, Depoux has cycled more than 30,000 kilometers across China, equivalent to several laps of the Tour de France. “One lap of the Tour de France is 3,500 miles or 5,600 km,” Depoux told Yicai Global. Cycling allows him to go a little farther without missing the roadside view, he added.

After his first taste of working in China, Depoux was determined to return. “I felt like I was definitely going back to China again, and not just for travel, I was to come back here to work,” he told Yicai Global. Finally, eight years ago, Depoux was stationed in Shanghai by Munich-based Roland Berger.

Since returning to the country his career has gone from strength to strength, something that Depoux attributes to the importance of the Chinese market.

“The Chinese market is very large and has different characteristics from the rest of the world. Developing a business here requires a deep understanding of the market. Once you master how to do that, it improves your skill set, so executives working here have often had more career opportunities over the years,” he said.

Even as a busy consultant, Depoux still cycles at least three times a week. If he sets off around 6 a.m. he can cycle to and from downtown Xujiahui to Dianshan Lake in the western outskirts, a roundtrip of around 120 km, in less than two hours, getting into the office before 9 a.m.

Having lived in Shanghai for the last eight years, he has seen the city’s urban environment become more beautiful and there has been an improvement in people’s behavior, he said.