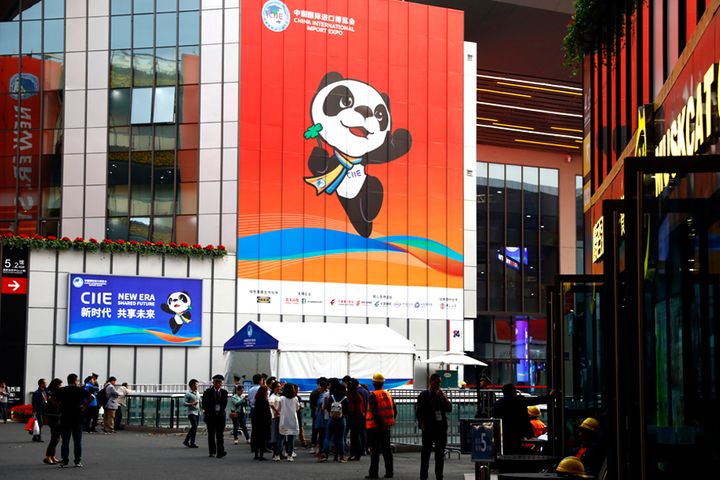 (Yicai Global) Nov. 5 -- Greece's Deputy Foreign Minister Kostas Fragogiannis has high hopes for this year's China International Import Expo, which kicks off today, and expects his country's delegations to have an even more successful trip than at the inaugural event in 2018.

The European nation plans to showcase innovative technologies across a range of fields including ships, communications and construction, Fragogiannis said in an interview with Yicai Global on Nov. 1, noting a shift from last year's focus on agriculture, tourism and culture.

The Hellenic Wine Association and Hellenic Federation of Olive Oil have met with local merchants and signed preliminary orders ahead of this year's CIIE after Chinese importers took to wine and olive oil imports following the first event, he continued, saying there will be more than 120 business discussions between Chinese and Greek companies during the 2019 CIIE.

Tourism is one of the most promising sectors in China-Greece trade, Fragogiannis believes. Greece's beautiful scenery and hospitalization are continually attracting Chinese tourists and the nation's pavilion at the CIIE will play to this, providing virtual reality sets to transport potential visitors 8,000 kilometers away to Greece's wine-producing chateaus and sunsets over Santorini.

Trade between the two countries has been deepening year on year since China's National Development and Reform Commission penned a cooperation plan with Greece at the first Belt and Road Forum for International Cooperation in 2017. The scheme, initially running to 2019 but extended to 2022, contracts the nations to promote projects in key sectors, identify investment areas and encourage financial institutions to turn the projects into reality.

Greece also became the first developed European country to official sign a Belt and Road agreement with China in August 2018.

The CIIE and the Belt and Road show China's attitude toward global trade, Fragogiannis said. Greece was a guest of honor at last year's CIIE and became the first developed European country to join the Belt and Road Initiative in August, suggesting the nation will become a key part of China's multi-continent trade and infrastructure plan, he added.

Greece has been ramping up its exports to China and hit a record high EUR900 million (USD1 billion) last year, according to official data. China has also been increasing its exports to Greece since 2014 and bilateral trade between the two countries grew at an average of almost 50 percent over the past three years.

Projects with particularly large investments have been the main driving force between Greece-China cooperation, Fragogiannis continued. "Grece and China offer each other important export and investment opportunities amid a slowing global economy and resurgent trade protectionism," he said.

"Chinese tourists to Greece are increasing in number every year, while Greek shipping companies have ordered ships worth tens of billions of dollars from Chinese shipyards" the official added, saying mutual beneficial cooperation between the two countries should expand steadily over the next few years.

He expects logistics, ports, luxury hotels and renewable energy will be Greece's best prospects for future tie-ups with China.