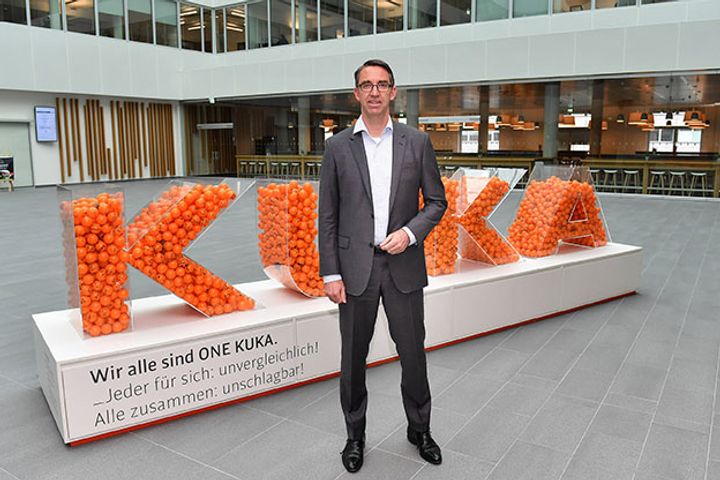 Head of China-Owned Robotics Giant Kuka to Step Down

(Yicai  Global) Nov. 28 -- The chief executive of Kuka will leave his role  after nearly a decade in charge of the German robotics giant owned by  Chinese home appliance maker Midea Group.

Chief  Financial Officer Peter Mohne will take over from Till Reuter as CEO in  December, the Foshan-based parent company said in a statement, without  providing an official explanation for the move. Mohne is expected to  spearhead initiatives to help the company improve operational efficiency  and increase cash flow.

"I  am proud to have been part of Kuka for the last ten years and pushed  robotics forward together with the team," the outgoing Reuter said.  "Robotics and automation are the key topics of the future. I wish you  all the best for the future. You always have my support. "

Reuter,  who joined Kuka in 2009, steered the company through the global  economic downturn. Under his leadership, Kuka has maintained a leading  position in the automotive industry and entered diversified new markets.  He worked with the Kuka team to formulate strategies toward Industry  4.0, collaborative robots, and growth in China.

Existing  investment deals will be unaffected by the development, the firm said.  "We want to continue to be a reliable partner for our customers, based  on the know-how of our employees," said Mohnen.

All  existing investment deals reached between Kuka and its dominant  shareholder Midea Group, including those regarding the robot maker's  intellectual property, will remain unchanged after the leadership  change.

Midea  Group will continue to supports the Augsburg-based firm with a focus on  research and development and investments in digitalization and Industry  4.0. The company's head office will remain in Germany, the company  said.

It  has been nearly two years since Midea Group bought out Kuka, the robot  maker achieved stable development despite a fall in operating revenue  targets for this year, Huang Yan, an independent home appliance sector  analyst, told Yicai Global. The company's performance is probably not  the driver of the switch, he added.

The  main reason for the change should be that the effect of integration  with Midea has not been as strong as expected and has also been slow,  Huang said.

Reuter  and Midea Group are divided on the direction of Kuka's development and  the firm's business in China has been slower than expected, though the  existing CEO does hold shares in Kuka and contributed to Midea's  acquisition of Kuka, he added.

Midea  Group currently occupies four seats on Kuka's board of supervisors, and  the Guangdong-based company played the role of the controlling  shareholder during the personnel adjustment.

The  outgoing CEO's position in the company has not been helped by the  declining performance of Kuka's robot business. Orders decreased 6.8  percent annually to EUR750.1 million (USD849 million) in the third  quarter, while those for the first nine months fell 6.1 percent to  EUR2.6 billion.

The  robot maker expected sales revenue for the year is around EUR3.3  billion, according to the most recent interim report. This projection  has fallen from EUR3.5 billion at the start of the year.