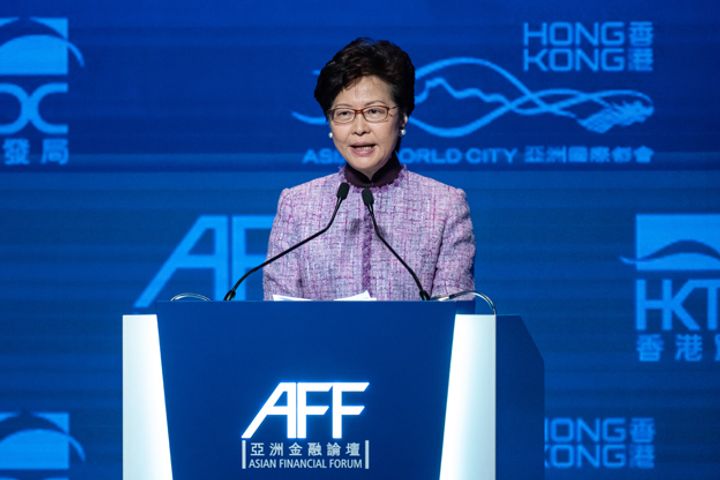 (Yicai Global) Jan. 14 -- Hong Kong will  issue its first group of permissions for online banks which have no  physical branches to give them means to issue bonds. The first batch of licenses will be granted in the first quarter of this year.

The first green bond will be issued to  stimulate entrepreneurial drive and come with a borrowing ceiling of  HKD100 billion (USD12.8 billion), Carrie Lam, Chief Executive of the  Hong Kong Special Administrative Region, said in her opening speech at  the Asian Financial Forum 2019 held in Hong Kong today.

Applicants should have sufficient  financial, technical and other related resources to operate virtual  banks, the Hong Kong Monetary Authority said in a guideline document  last May.

Earlier media reports said that eight  companies including Shenzhen's Tencent Holdings, Hangzhou's Ant  Financial Services Group, Standard Chartered Bank Hong Kong, and  Shanghai's ZhongAn Online P&C Insurance have applied for the related  permit and advanced to the next round in terms of selection.

Mainland China has served as a driving  force in Hong Kong's transition from an economic center to a financial  center, Lam also said in her speech. The number of initial public  offerings on the Hong Kong bourse ranked highest in the world last year,  with the total funding of USD37 billion. Hong Kong's scale of asset  management was USD3.1 trillion, and the total amount of funds it handled  exceeded 75 percent of the world's total of offshore Chinese yuan.