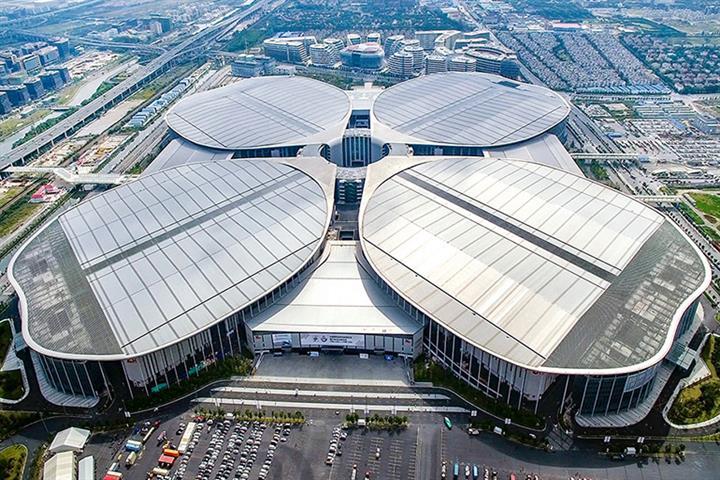 (Yicai Global) Oct. 5 -- As one of the major platforms expanding the spillover effects of the China International Import Expo, the Hongqiao Import Commodity Exhibition and Trading Center is making efforts to help turn more CIIE exhibits into commodities for the Chinese market.

The center has recently signed a strategic cooperation agreement with the "6 + 365 days" One-stop Trading Service Platform, set up by the Shanghai government.

To achieve win-win results, the two sides will give full play to their advantages in resources, platform influence as well as operations in urban commerce and the new retail sector.

The "6 + 365 days" platform can put on display the brand information and relevant product and event information of enterprises as well as offer supply chain services, while the Hongqiao exhibition and trading center will offer venue, operation and advertising services.

Also, the center on September 28 announced cooperation with Shanghai Media Group's BesTV+ streaming media, which means new opportunities for CIIE exhibitors and traders to attract customers, according to the center.

"With the support of SMG in promotion and advertising, we can get closer to consumers and become a permanent window for CIIE exhibits to get access to the Chinese market," said Yan Yibin, an executive of the center.

The center, serving as an online and offline cross-border e-commerce platform combining B2B and B2C retail and wholesale, said it strives to create an open and high-quality exhibition and trading platform with a high concentration of foreign brands and products at excellent prices.

"Over the past three years, the spillover effect of CIIE has continued to expand," said Cai Jun, general manager of the Hongqiao Import Commodity Exhibition and Trading Co.

"The center, as a major platform to enlarge the effect of the expo, has gradually formed an ecosystem where exhibits are turned into commodities, exhibitors become investors, and buyers become traders," Cai noted.

By the end of July, it gathered more than 15,000 products from more than 1,800 brands which are owned by nearly 200 companies from over 70 countries and regions. Among them, more than 70 companies are CIIE exhibitors, and CIIE exhibits account for over 70 percent of the total number of products in the center.

Covering an area of 400,000 square meters for the moment in western Shanghai, the center mainly consists of exhibition halls for imported cars, food, household items and other commodities.

During the second CIIE and its extended period, the center has received passenger flows of more than 150,000 visits, gaining a total sales volume of over CNY10 million (USD 1.47 million). Also, during the Shanghai Double Five Shopping Festival this year, the center posted an overall sales volume of CNY 7.8 million.

So far, some exhibits to be shown at the third CIIE have already entered the center for sale, such as organic oatmeal of Danish brand Smagsriget, toys of Danish brand Lego and German brand Playmobil, and cosmetics and beauty products of French brand Yves Rocher.