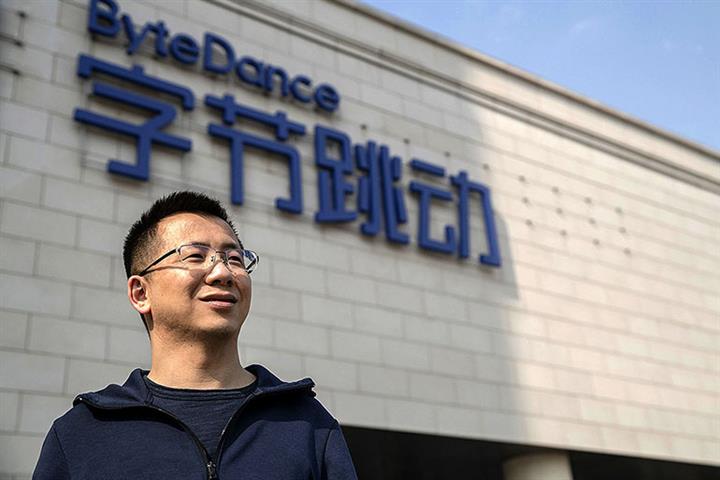 (Yicai Global) May 20 -- ByteDance Technology's Zhang Yiming will be replaced by human resources chief Liang Rubo after the billionaire founder steps down as chief executive by year-end.

Zhang will start in a new role to focus on "long-term strategy, corporate culture, and social responsibility," the 38-year-old serial entrepreneur said in a letter to staff. He will remain a member of the board.

Co-founder Liang will work side by side with his former college classmate, Zhang, for the next six months to ensure a smooth transition. The two studied together at Nankai University in Tianjin before forming ByteDance in 2012.

"The truth is, I lack some of the skills that make an ideal manager," said Zhang. "I'm more interested in analyzing organizational and market principles, and leveraging these theories to further reduce management work, rather than actually managing people."

ByteDance's applications have become so popular so fast but the parent's growth has been limited in some ways. In late April, the nine-year-old company, which has expanded into one of the world's biggest unicorns, once again squashed speculation about its alleged initial public offering plans amid a tightening regulatory environment. The owner of short-video sensation TikTok has been dealing with headwinds in the US amid concerns about user privacy.

Liang, who manages ByteDance's rapidly increasing headcount of more than 100,000 employees, has his roots in software. He's been responsible for developing corporate communication and collaboration platform Lark since 2016 and before that, he was head of the Beijing-based firm's product development, including news aggregator Jinri Toutiao and an advertising system.

Zhang has scored incredible achievements during his reign. Last month, he ranked 39th in the 2021 Forbes Global Rich List with a fortune of USD35.6 billion. In 2013, he was featured in the Forbes China 30 Under 30, and Fortune's 40 Under 40 China Rich List.

Even after the transition, Zhang's presence is not expected to disappear. "I believe I can best challenge the limits of what the company can achieve over the next decade, and drive innovation, by drawing on my strengths of highly-focused learning, systematic thought, and a willingness to attempt new things."