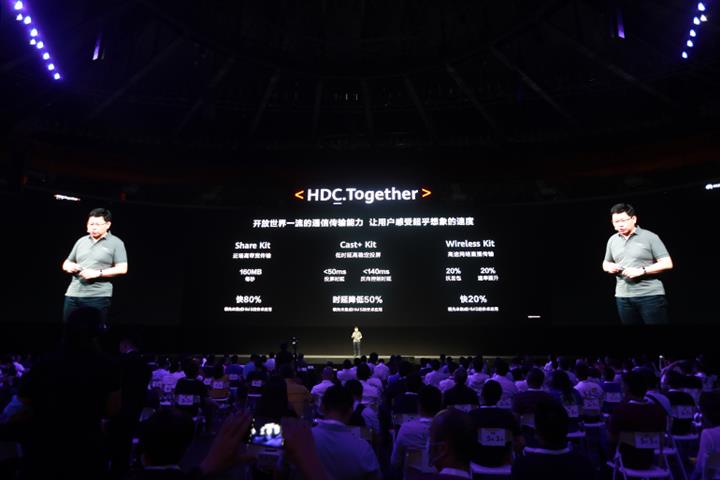 Huawei’s HarmonyOS 2.0 to Appear in Handsets Next Year

(Yicai Global) Sept. 10 -- Huawei Technologies has unveiled the second version of its own operating system and said it may debut in smartphones next year.

The Chinese telecoms giant will release a mobile phone version of HarmonyOS 2.0 in December, Yu Chengdong, chief executive of its consumer devices business, said at the Huawei Developer Conference today.

“So maybe starting from next year, we’ll see smartphones with HarmonyOS,” Yu said at the launch.

Huawei was included in the US Entity List in May last year, prohibiting US businesses from selling related technologies and products to the Shenzhen-based company. Google stopped cooperating with Huawei and suspended mobile services for its phones. Huawei then revealed the first version of its self-developed HarmonyOS in August last year.

The latest version will be officially open sourced today and Huawei donated the code to the China OpenAtom Foundation, Yu said. Huawei's handsets will be fully compatible with the new system. Application developers in China will get the beta version at the end of this year.

Subsequent Huawei products including tablets and watches will also be equipped with HarmonyOS in addition to Huawei's smart screen, Wang Chenglu, president of the firm’s consumer business software department, said at the conference.

The first product equipped with HarmonyOS will be the Honor Smart Screen. In 2020, there will be HarmonyOS 2.0 version, which will be applied to personal computers, watches, bracelets, car-equipped machines and other products.

Harmony 3.0 will be launched next year to achieve optimized software and hardware coordination and will be applied to speakers and headphones, according to the roadmap for the original OS.