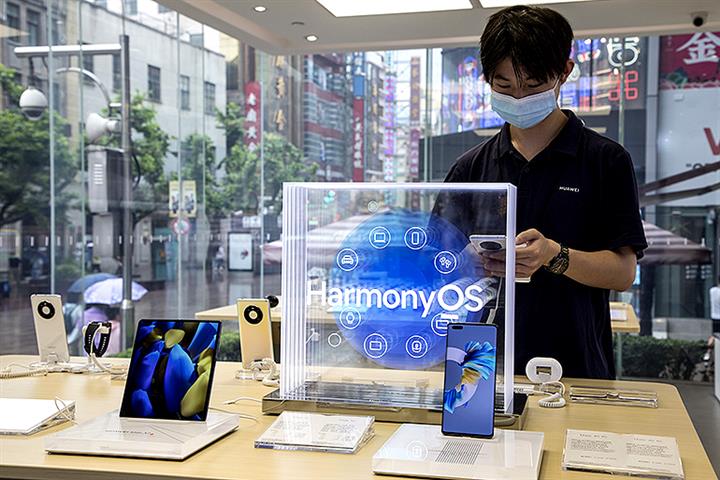 (Yicai Global) June 3 -- Chinese telecoms giant Huawei Technologies has launched the 2.0 version of its Harmony operating system for smartphones and other electronic gadgets, aiming to install the self-developed system on 300 million devices by December to take a 16 percent market share.

“Nobody is an isolated island in the era of the Internet of Everything,” Richard Yu, the chief executive of Huawei’s Consumer Business Group, said at the launch event yesterday. “Every person and device is part of the IOE.”

HarmonyOS 2.0 can be used on smartphones, tablets, smartwatches, Internet of Things devices, and other accessories, enabling interconnections between smart devices, said Wang Chenglu, president of the CBG’s software division.

Shenzhen-based Huawei released a beta version of Harmony for handset developers in December, less than two years after the US government sanctioned the firm over national security concerns, stymying its smartphone business. Roll-out of the in-house OS will help cut its dependence on Google’s Android operating system.

HarmonyOS is “essential for Huawei’s consumer business group in the short term, and a starting point for its strategic transition in the long run,” according to analysts at Guotai Junan Securities. It will accelerate Huawei’s shift from an advanced hardware maker to an advanced software developer, they added.

Handsets running on Harmony can work as fast as new ones after three years with extremely little memory, unliked Android-installed phones that have been used for a long time, Wang added. Harmony also enables background apps to run for a long time, he said.

Over 1 billion Huawei devices are being used worldwide, of which more than 730 million are mobile phones, and about 90 percent of them can update their operating system to HarmonyOS. Securities brokers expect that to serve as a launch pad for the system’s development.

Huawei is negotiating with the developers behind the world’s top 200 apps to jointly create cross-platform applications, Xinhua News Agency reported. Midea Group, Supor, iFlytek, and BAIC Group already have products that use HarmonyOS, the Shanghai Securities News reported. Handset maker Meizu Technology will also use it in other smart products besides phones.

“The market is concerned about the current installation rate of Harmony,” Yu Yong, one of its developers told Yicai Global. “The system is useless without its ecosystem.”

It takes from five to seven years to build an ecosystem around an OS, but Huawei is attempting to do that in about a year, Yang Haisong, vice president of its consumer business AI and full-scenario business department, has said. That will be Huawei's biggest challenge in ecosystem construction, he added.

As Harmony takes on the role of China’s distributed operating system, Huawei is bound to put more effort into database, compiler, programming language and other basic software to become a leading player in the country’s software industry, according to Guotai Junan Securities.