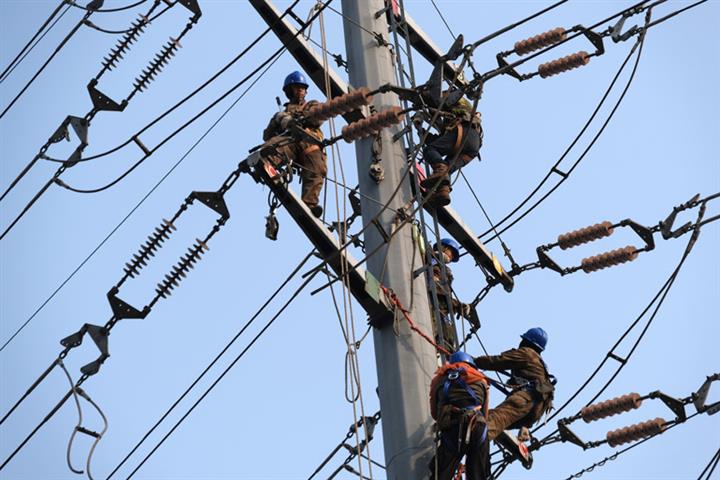 (Yicai Global) Dec. 16 -- China’s electricity supply is being stretched as a harsh winter sets in early, driving people to turn up the heating and impeding power generation from renewable sources such as solar and wind. The resulting shortfall has led to power rationing in central Hunan and eastern Zhejiang provinces.

Peak loads this winter are expected to exceed the maximum power supply that Hunan province can generate, said Chen Hao, spokesperson for the State Grid Hunan Electric Power. Based on the rising electricity consumption in the first 11 months of the year, Hunan is expected to run short of power this winter, regardless of the weather, he added.

The shortage in the provincial capital Changsha is even more severe due to a drop in coal supplies, lower water levels at reservoirs, decreased power input from outside regions and the inability of wind turbines to generate electricity effectively under freezing conditions, said Wu Donglin, spokesperson for Changsha Power Supply.

State Grid Hunan expects there to be a shortfall of between three million and four million kilowatts a day until next spring, according to a report by the Hunan Daily on Dec. 3. If any power plants are affected by an insufficient supply of coal, problems with the equipment or other factors, then the situation will just get worse, Chen said.

As a result, State Grid Hunan is asking companies that use a lot of electricity to shift their production to off-peak times. It is also restricting the use of electricity to light up big buildings and landscapes in order to reserve enough for residents, the power supply firm said on Dec. 11.

Changsha took steps on Dec. 8 to regulate electricity consumption by allotting enterprises certain time periods to plug in. Other cities in the province, including Zhuzhou, Yueyang, Hengyang, Yiyang and Chengzhou, have followed suit.

On the eastern coast, Zhejiang province is also rationing power. As the weather turns colder, many people are using air conditioners to generate heat, driving up the electricity load. From Dec. 14 to Dec. 31, air conditioner units in offices can only be turned on when temperatures fall below 3 degrees Celsius, Zhejiang Online reported on Dec. 14. And the temperature set should not be higher than 16 degrees.

Electricity consumption in Zhejiang was up 2.3 percent from January to November year on year to 436.6 billion kilowatt hours, according to the State Grid Zhejiang Electric Power.