Is packaging Necessary? Not for These Shops
Eva Botkin-Kowacki
DATE:  Apr 17 2019
/ SOURCE:  The Christian Science Monitor 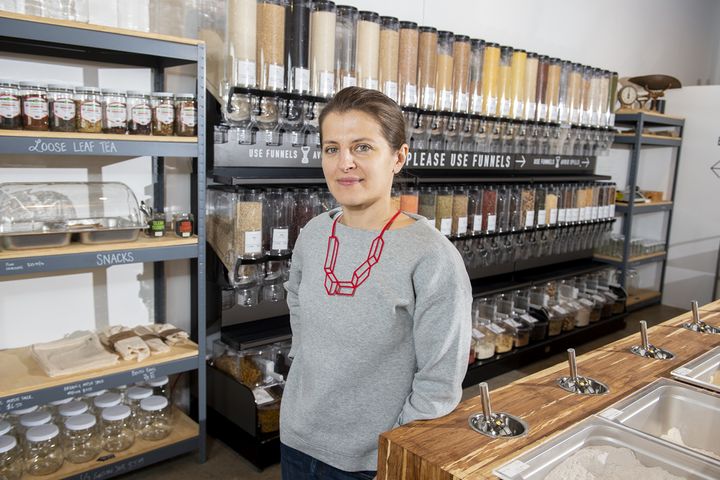 Is packaging Necessary? Not for These Shops

The advent of modern food packaging has given us portability, freshness, and a lot of waste. Could a return to a simpler kind of grocery store help us live more lightly on the planet?

Brooklyn resident Katerina Bogatireva had long carried reusable bags to the grocery store and rejected single-use plastic water bottles. But when her son, Sepand, was in kindergarten, she stepped up her game.

After having a sustainability lesson in school, she says, "He was very concerned. And he said, 'Mummy, do you know how long plastic will remain in the landfill?' And that sort of broke my heart."

For Ms. Bogatireva, that moment spurred a lifestyle change that led to a business venture. Now, four years later, she owns a grocery store called Precycle, where shoppers can buy their fruits and vegetables, pastas and grains, flours and legumes, and oils and vinegars without the packaging that typically comes with them.

Precycle isn't the only packaging-free business cropping up in the United States in recent years. There's also Zero market in Colorado, Fillgood.co in California, and Package Free Shop, also in Brooklyn. And large corporations are starting to take notice, too. Companies like Starbucks, Nestlé, Häagen-Dazs, Procter & Gamble, and others are taking steps to reduce their packaging waste.

Starbucks has made plans to ditch plastic straws, Nestlé pledged to make its packaging entirely recyclable or reusable, and British grocer Iceland has promised to eliminate plastic packaging from its own brand products.

This comes as part of a broader cultural shift in the popular environmental movement, from touting recycling to emphasizing efforts to reuse and reduce consumption of single-use items like bags, cutlery, and containers. And if this approach continues to catch on, that could say something about what people value.

"Plastic is everywhere in our economy," says Thomas Kinnaman, an environmental economist at Bucknell University in Lewisburg, Pennsylvania. So if companies like Precycle take off, he says, it will signal that people really do want to find another way, despite the benefits plastic packaging can provide.

One benefit of plastic packaging has been convenience. If grocery goods are already portioned out into lightweight packaging and plastic bags are on hand, the only things shoppers need to bring to the store are themselves and their wallets. Furthermore, such packaging has allowed for the development of convenience items like pre-made meals and individual snack bags for children's lunches.

Opting to avoid packaging entirely can be particularly inconvenient, says Ms. Bogatireva. When she decided to reduce her own contributions to landfills, she found that she had to cobble together her shopping trips, stopping at multiple stores and farmers markets to find the items she needed without the plastic. Precycle grew out of that hassle, officially opening its doors in December 2018 to make it easier for consumers to choose packaging-free options.

Here's how it works: Customers bring their own containers to Precycle, or buy reusable vessels sold there. When they enter the store, they have to weigh their empty containers, which they then weigh again at checkout to know how much to pay for. Despite the inconvenience of carrying containers to the store, people are buying into it, says Ms. Bogatireva. Precycle has a loyalty program and already about 1,200 people have signed up.

Another benefit of packaging that has become integral to modern society is its ability to make something perishable last much longer, says Susan Selke, director of the School of Packaging at Michigan State University in East Lansing.

"The advent of modern packaging is often tied to the change from crackers in a barrel at the store to prepackaged crackers that could sit on the shelf and stay fresh and crispy for a lot longer," she says. "Could we conceivably go back to that cracker barrel-style economy? Maybe. But it would involve drastic societal changes."

That is a limitation for Precycle, says Ms. Bogatireva. As a result, the store primarily carries ingredients rather than ready-made foods. But even then, there are challenges. Ms. Bogatireva has no plans to stock meat or fish, but customers want cheese, so she has opted for wax-wrapped cheeses, and encourages customers to make candles from the wax.

Not everyone is inclined to make these lifestyle choices, says Dr. Kinnaman. But those who do are often doing a sort of informal cost-benefit analysis weighing factors like the convenience and nonperishability against the guilt they may feel for filling up their trash cans and their understanding of the danger to the environment posed by that waste.

Some things are beyond individual consumers' actions, though. "My biggest challenge is to reduce waste as a business", says Ms. Bogatireva. It's tricky to find suppliers that use no single-use packaging whatsoever. For Precycle, she opts for suppliers who use recyclable packaging, like cardboard, when there isn't a waste-free way to transport products.

"The idea is to do what you can," she says. "Every little bit counts."