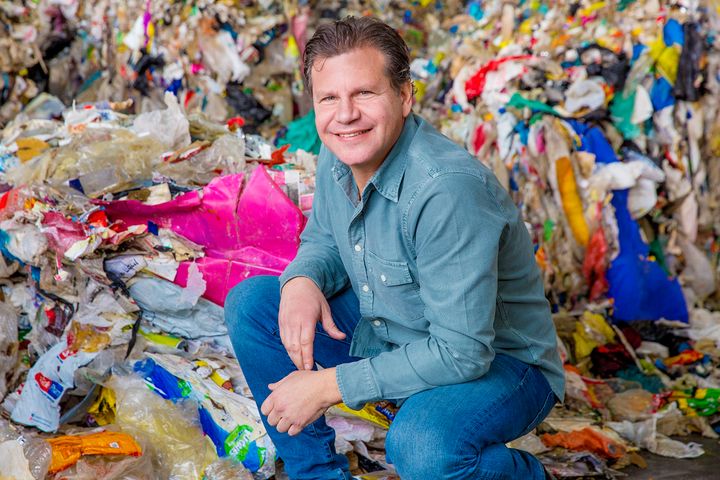 Garbage is a blight. It gets collected by the city — or in some cases even by the mafia —, which pile it up, burns it or dumps it illegally somewhere else, contaminating land and sea. Rich countries export theirs to poor ones, which burn their own, fouling the air even more. Recycling is a sop, not a panacea: the World Bank estimates that global municipal solid waste will grow from 2.01 billion tonnes a year to 3.4 billion tonnes by 2050.

No large-scale solutions for trash have ever been found, aside from returning to the Stone Age — until the Israeli startup UBQ invented a way to turn garbage into something extremely useful: a new composite material that looks like plastic, acts like plastic but unlike plastic, is fully recyclable.

All garbage? "With the food residue too," boasts co-founder and CEO Jack "Tato" Bigio, a member of the extremely experienced executive and advisory team, which includes Nobel laureate Roger Kornberg. The company, which has reached 33 employees, is working on converting trash into bricks and pavement too.

Why plastic? Itself a blessing and a blight too, it was invented in the early 1900s and hailed for its indestructability, then bewailed for that very characteristic. We assuage our consciences by tossing one of every hundred containers we use towards a recycling bin, but recycled plastic quickly loses its features. UBQ's composite includes cellulose from foods and wood and can thus be recycled indefinitely, the company explains.

Manufacturers can use this new material to make things like panels and pipes by extrusion, or to make bins, pallets, boxes and flower potsby injection molding.

The pre-plastic pellets are made from more finely chopped trash; road materials and bricks are being developed from coarser trash. The only input into both processes: garbage. The only output: plastic precursorand water vapor that escapes from the drying garbage itself.

Crucially, the company's process it is massively carbon-negative, Bigio explains.

How? "Because of the GHG emissions from garbage," Bigio explains. "One tonne of solid waste emits about 7 to 9 tonnes of GHGs a year."

Founded in 2012, UBQ operates out of a WeWork office in Tel Aviv and an industrial plant in the Negev Desert.

"At this stage, we are focused on the plastic applications (which are the more complicated and also profitable) while developing the next generation: bricks, stone, pavement," Bigio says. "I believe it will take us between one to two years to be out with that product."

Asked how durable the bricks are, Bigio couldn't be sure; but Haaretz held one. It looked like a brick, it felt like a brick and we will know soon enough.

The company isn't profitable yet, because of investment in R&D, personnel and factories. "It really depends on us. I believe it will take a few years," Bigio says.

The company's process can even handle electronics, which people know perfectly well they shouldn't junk, but do anyway. Electronics get crushed and chopped with the rest of the garbage, and heavy metals get removed with metal elements in the trash, by applying magnets and metal detectors to the trash throughout the conversion process.

The recyclability of UBQ's material is also greater than that of conventional plastics, leading us closer to a truly viable circular economy, right now, Bigio says.

So the company has invented a patented method to convert our crap into a novel patented thermoplastic substance (i.e., it melts when heated) that looks like plastic, behaves like plastic, has the tensile strength of plastic, and can be 100% recycled. It emits no waste, just water vapor.

The price of its composite is competitive with ordinary plastic, he says. Anyway, collecting and dumping trash is expensive too. As for the future production trash conversion plants into bricks and roads, the company intends to sell whole plants, and points out that in the case of needy countries, organizations such as the World Bank or UN could help with funding.

It's a solution for everybody: everybody produces garbage and wants plastics and needs building materials.

One rub. If UBQ's product ends up in a landfill or the sea, it behaves like all other plastic. It isn't compostable like the alternative plastic made by companies such as Israel-based Tipa, or biodegradable. On the other hand, if we recycle at all, it can be recycled, and people do like their Tupperware and "rubber" duckies.