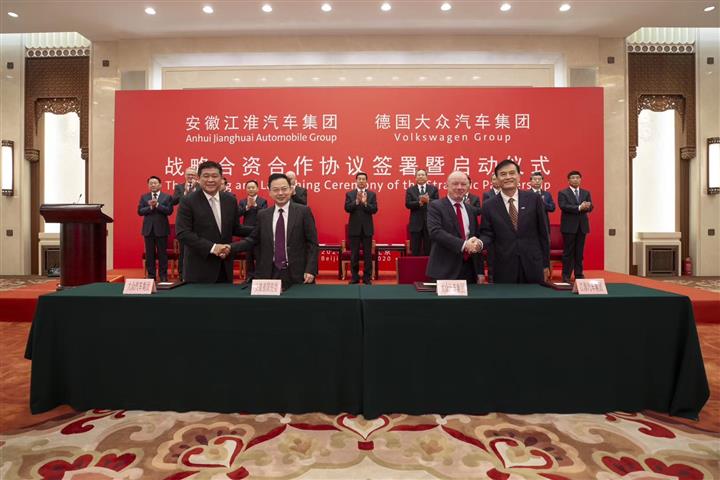 (Yicai Global) May 29 -- Shares in the listed arm of Chinese state-owned Anhui Jianghuai Automobile Group Holding surged for a fourth straight day after it confirmed reports that Volkswagen plans to buy half of its parent company.

Anhui Jianghui Automobile Group stock price [SHA:600418] finished 8.1 percent higher at CNY9.06 (USD1.27) today, its smallest daily gain since May 26, when Reuters reported the deal, citing anonymous sources. The shares have jumped by the 10 percent daily limit over the past three days.

“Together with strong and reliable partners, Volkswagen is strengthening its electrification strategy in China,” VW Chief Executive Herbert Diess said in a press release. “The electric cars segment is growing rapidly and offers a great deal of potential for JAC Volkswagen.”

The pair hope to finalize the deal by the end of July and close the transaction by the end of the year, according to JAC’s statement, which did not disclose financial details. Reuters’ sources said the deal was worth at least CNY3.5 billion (USD491 million).

It will allow the JV to use Volkswagen brands and NEV products in the hope that annual output reaches 350,000 to 400,000 units by 2029. VW’s investment in the venture will likely reach around EUR1 billion (USD1.1 billion) and the company is willing to work closely with JAC across multiple sectors, the statement added.

VW also plans to pick up a near 26.5 percent stake in Guoxuan High-Tech, China’s third-biggest power battery maker and known as Gotion overseas, to become its largest shareholder, the target said in a statement yesterday. Deiss described the strategic investment as Volkswagen “actively driving forward the development of battery cells in China.”