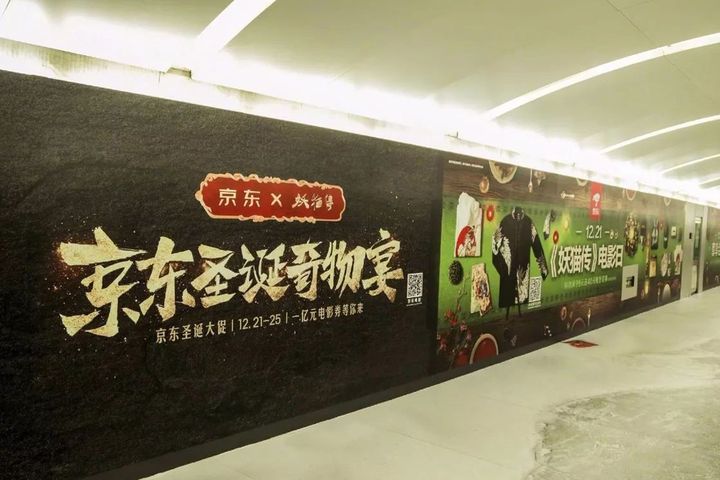 Unlike Alibaba Group Holding Ltd. [NYSE:BABA], the Beijing-based business-to-customer online retailer has opted for high-profile cooperation with Chen Kaige, one of China's most prominent film directors, paying 60 to 70 percent of the marketing and distribution costs for Chen's latest production, Legend of the Demon Cat.

Chen is most well-known for his award-winning Farewell My Concubine, a drama movie he directed in the 1990s. However, his later works are limited in number and of relatively poor quality. "We're tied up (with Chen Kaige), and success and failure will be mutually shared. We're working together to make it a success," explained Men Jipeng, a vice president at JD.

The company has spent more money on marketing the film than on its e-commerce promotions during the Double 12 (Dec. 12) online shopping festival, and more than 80,000 third-party retail businesses are involved in relevant marketing activities, Men said.

We are living in the internet era, and people in the movie industry need to adapt themselves to internet thinking. "Our partnership with JD has aroused great attention in the movie market, because many also want to form similar partnerships. We're setting the benchmark," Li stated.

The pair started talks on their cooperation late last year. The Legend of the Demon Cat project fitted perfectly into the schedule and they closed the deal shortly thereafter, Men said.

It offered free referrals to sellers participating in marketing the movie, and the sellers got support in generating traffic during warm-up promotions and parallel promotion events.

The firm set a pool of three million free tickets to muster enthusiasm among its sellers, with participants given priority in allotting the tickets.

New Classics Media and the e-commerce jumbo will distribute CNY100 million worth of film tickets on JD, and consumers can offset a part or the full ticket price using the vouchers.

All sellers will take part in sales of Legend of the Demon Cat merchandise, and JD's Fashion Online has designed limited edition garment products for the film jointly with the producer and French designer Jonathan Riss.

JD has some 266 million active users, Men Jipeng stressed in an interview with Yicai Global. "Apart from regular moviegoers, the website brings together the largest number of Chinese middle-class consumers. Their preferences reflect future consumer trends in China."

The value of the innovative marketing model lies primarily in expanding the movie's market reach, Li Ning noted, as JD's user network gives the production greater exposure to potential film and non-film consumers and encourages them to buy.

JD has upped its operations in the entertainment market since early this year. It mounted a marketing campaign dubbed Disney Dream Day for Kids for all Disney cartoon characters, and co-marketed Hollywood blockbusters Transformers: The Last Knight and Justice League.

All previous co-marketing campaigns are limited in scale relative to the promotions and merchandising events for Legend of the Demon Cat, Men noted.

"Intellectual property licensing is typically done after a movie becomes a box office hit. At JD, however, merchandise sales can start much earlier leveraging JD's existing resources. Sold products are monetized, and new traffic is generated through merchandising," he said.

The entertainment market has always remained a key battlefield for major Chinese internet firms. JD is a latecomer compared with Alibaba and Tencent Holdings Ltd. [HK:0700]. Throughout its business diversification efforts, the company has kept the focus on e-commerce as its core business, Men told Yicai Global, adding that the firm does not plan to set up a separate entertainment division at present.