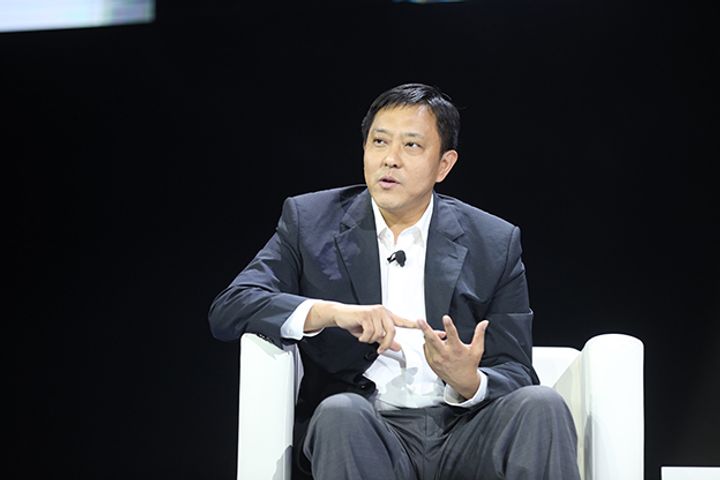 Entrusted with rejuvenating the PC business, Liu kicked off a series of reforms, from product line restructuring to channel sales and team management.

Liu said the consumer market is the biggest challenge facing him now. The entire PC market has gone downhill in recent years amid rapid growth of online sales. More than half of sales are transacted online. Lenovo has over 10,000 brick-and-mortar stores and offline marketing has remained its strongest point.

"The most difficult part is how to connect online and offline operations, and bring the firm back on track with customer growth by revamping online-offline sales channels employing the New Retail model," he said at a conference for the release of the 25th anniversary edition of the ThinkPad.

Lenovo's core business is personal computers. Lenovo was the global leader in the PC market after it acquired ThinkPad from International Business Machines Corp. [NYSE:IBM].

China's PC market has been on a downtrend following the rise of smartphones and the mobile internet. In the face of increasing competition posed by its old rivals such as Hewlett-Packard Co. [NYSE:HPQ] and Dell Inc. and new entrants such as Huawei Technologies Co. and Xiaomi Inc., Lenovo has lost market share. It lost its title as the bestselling PC brand in the world to HP in the first quarter.

Liu is trying to integrate online and offline channels as it goes up against at least one rival with two-digital sales growth. "We slashed stock keeping units (SKU) by 60 percent, and consolidated many similar and identically priced products, allowing customers to choose online or offline purchase method themselves," he said.

The same strategy has been adopted for the ThinkPad series. Its name was nearly synonymous with business laptop, but their market positioning was blurred with the release of some relatively low-end models in recent years. Liu devised a new ThinkPad strategy to refocus on high-end consumers. The company will introduce VIP services to sharpen the brand's positioning, he said.

Lenovo has formed close partnerships with Chinese e-commerce giants such as JD.com Inc. [NASDAQ:JD] and Alibaba Group Holding Ltd.'s [NYSE:BABA] Tmall.com. It embarked on a joint initiative with JD.com in July last year, targeting USD9.04 billion (CNY60 billion) of sales revenues on the website in the next three years. A quick succession of marketing campaigns ensued.

On the offline market, Lenovo has branched out into the New Retail business, after Xiaomi and Huawei. It hopes to bring changes to its single-format sales outlets, and transform them into 'ecosystem stores,' offering sales, customer experiences, services and repairs in one place.

By connecting online and offline operations, it will be able to keep track of the stores' and sales representatives' performance and the sales volumes of popular products, and improve logistics efficiency. The floor efficiency at the first pilot store jumped by 290 percent, he said.

Lenovo does not want to label itself as a PC company. Instead, it will expand businesses beyond hardware sales. Its long-term strategy involves developing franchise products for the ThinkPad series such as 'Think Smart IoT' (Internet of Things) products and services.

"These products are not only hardware, since IoT products must be have a cloud platform, and software development is necessary. And [we can] expand businesses from software to include services," said Liu.

He envisions a massive business transformation where all the company's PC stores will be upgraded to 4S (Sale, Spares, Service, Survey) outlets.

Liu denounced the 'obedience to authority' and 'inactivity' at an internal managers' meetings focused on Lenovo's Chinese strategy and corporate culture in August. The managers must "have dirt on their hands," he said.

Changes at the firm have started to bear fruit. Revenues from the PC and smart devices businesses rose by 4 percent annually to USD15.387 billion, accounting for 71 percent of earnings in the second quarter.

The high-profile merger between Lenovo and Fujitsu Ltd. [TYO:6702] closed after being in the works for a year. "After the merger, Fujitsu will remain as an independent company, and the deal will boost Lenovo's competitiveness in the Japanese PC market," Liu said.

A joint venture between NEC Corp. [TYO:6701] and Lenovo had a 24.6-percent share of the Japanese PC market last year, compared with Fujitsu's 17.5 percent and Dell's 12.3 percent, per a research note published by JP Morgan & Co. The deal with Fujitsu may push Lenovo's market over 40 percent, making it the dominant player in Japan.

Lenovo's global market share was 21.6 percent in the first three quarters of this year. Fujitsu's 4-percent share may help the Chinese firm reclaim the top position from HP, who has a 22-percent share.

While HP and Lenovo have nearly equally market shares, the American computer manufacturer's two-digit sale growth poses a serious threat to the latter. Business expansion through acquisition alone cannot guarantee reorganization is successful, and Liu does not have much time to waste if he wants to turn Lenovo into a non-PC company.