Father of Lithium Batteries Says Raw Materials Used in Them Will Run Out in Five to 10 Years
Qian Tongxin
DATE:  Nov 03 2021
/ SOURCE:  Yicai 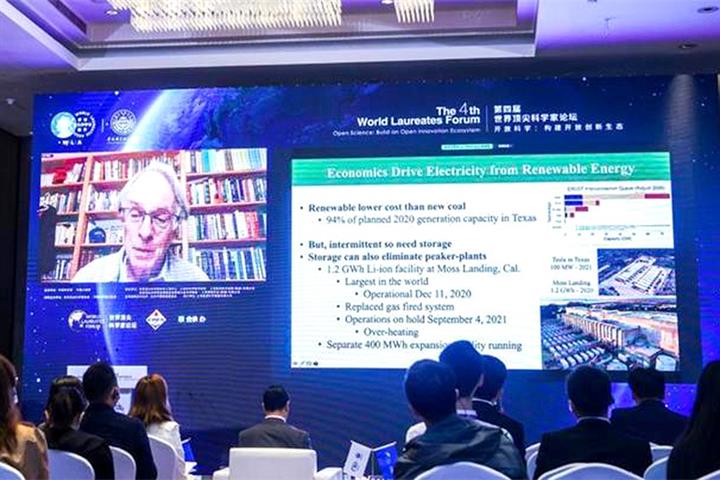 (Yicai Global) Nov. 3 -- The supply of raw materials needed to make lithium-ion batteries, which are used to power electric vehicles and electronic devices such as smartphones and computers, will be exhausted within the next five to 10 years, according to the man who invented them.

The world needs to find alternative materials to make rechargeable power packs as there is not enough lithium left for future production of lithium-ion batteries, Stanley Whittingham, who also won the 2019 Nobel Prize for chemistry, said yesterday at a sustainable energy panel discussion at the fourth World Laureates Forum in Shanghai.

Sodium-ion batteries are not a plausible solution due to the technical obstacles, Whittingham said. A number of companies are developing them as alternatives to lithium-ion power packs. China’s Contemporary Amperex Technology Limited, or CATL, unveiled the world’s first sodium-ion battery in July.

Whittingham said recycling of lithium-ion batteries should start soon, as prices may rise in the future. Batteries also use a large amount of cobalt and nickel, which will produce waste if they cannot be recycled, Whittingham said, adding that there are several projects looking at how to cut down on the use of metals such as cobalt.

Research is needed into which kinds of materials can store energy, Steven Chu, winner of the 1997 Nobel Prize for physics and a former US energy secretary, said at another panel session at the WLA. Graphite and silicon could be used, he said.

Chu, who has been involved in the research and development of new energy batteries in recent years, also mentioned the technology used in extracting lithium from salt lakes. He said the lithium content of some brines can reach 95 percent, and there are now many teams around the world that are studying such technology.

In the next 10 to 20 years, clean electricity may account for 60 percent of the world’s energy use, Chu said, noting that there will be challenges such as restrictions on the power grid, energy resources, and power storage.