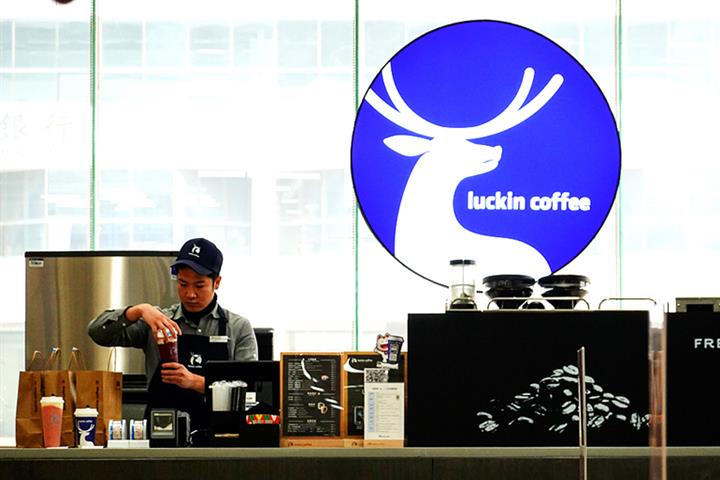 (Yicai Global) June 29 -- Luckin Coffee’s US-listed shares will be suspended today in readiness for delisting after the embattled Chinese firm decided not to appeal the Nasdaq’s decision. It has also scaled back the aggressive pace of new store openings since the start of this year, according to Beijing Business Today.

Luckin’s new store openings are down over 80 percentfrom the same period last year, the report said today, citing data from corporate information provider Tianyancha. Just 186 companies have registered under the Luckin Coffee name in China so far this year, down from 2,000 in 2019 and 1,800 in 2018, while 99 have had their business licenses revoked or are in the course of cancellation.

Luckin Coffee has units across the country that support the expansion of local stores. So the data allows inferences about the total number, changes in number and shifts in the pace of growth, the report said.

The Starbucks wannabe had been expanding at a breakneck speed, but the tempo has slowed and the firm has started to close some outlets in the wake of a CNY2.2 billion (USD310 million) accounting scandal that has rocked the firm and led to its delisting.

Luckin notified the Nasdaq on June 24 of its decision to withdraw its petition for a hearing and not appeal its removal from the exchange, the Xiamen-based company said in a filing to the US Securities and Exchange Commission on June 26.

The company’s stock price [NASDAQ:LK] tumbled 54 percent to close at USD1.38 on June 26 after circuit breakers stopped trading six times, giving the company a market capitalization of about USD347 million.