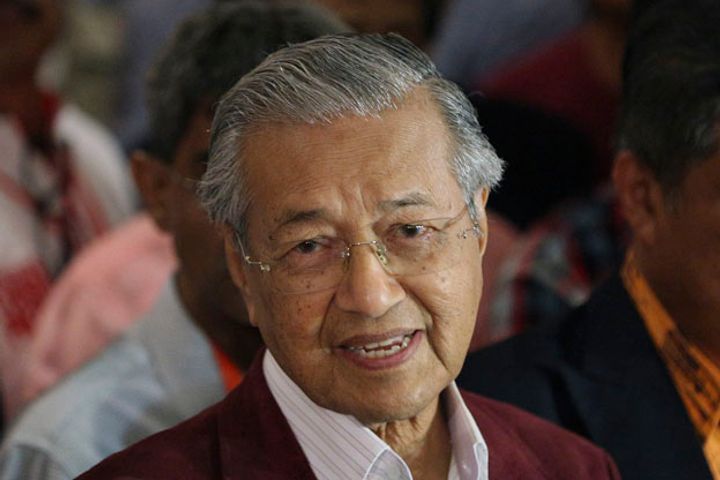 Mahathir has always been regarded as an anti-China activist, and the ruling Pakatan Harapan, which means the Alliance of Hope, coalition doesn't approve business deals with Chinese enterprises, which are deemed to disregard Malaysia's interests, the report added.

Malaysia is a trading nation. Therefore, it will not become an enemy of China, such a huge market, said Mahathir while commenting on Pakatan Harapan's election campaign pledge to review the existing Chinese investments and business deals in Malaysia.

"I have always regarded China as a good neighbor, and also as a very big market for whatever it is that we produce. Malaysia is a trading nation. We need markets, so we can't quarrel with such a big market," Mahathir was quoted as saying.

However, Chinese enterprises investing in Malaysia should not be overdependent on imports of China's raw materials, funds and labor force, which Mahathir said prevents Malaysia gaining practical advantages from those investments.

Mahathir said Malaysia has awarded many business contracts to Chinese enterprises. However, they are inclined to employ Chinese workers and use China-originated materials, which don't add jobs and transfer technology and skills to the Southeast Asian country.

He pointed to the "forest city project" by Chinese property developer Country Garden Holdings in Johor, southern Malaysia, saying it is too expensive for ordinary Malaysians. Therefore, it only attracted rich Chinese.

Malaysia does not want Chinese capital to purchase a vast tract of land in the country, and then build a city to attract foreign immigrants en masse, no matter where these immigrants come from, whether it be from India, the Middle East, or Europe. No country in the world wants to see an influx of excessive number of immigrants, let alone Malaysia, Mahathir said.

He said that PH coalition is not against foreign capital if it brings in technologies, builds factories in local areas, and employs locals to achieve joint prosperity. For instance, the investment made by Jack Ma, the executive chairman of Alibaba Group Holding, is based on the principles of training Malaysians, encouraging the engagement of Malaysians in the business, and then running businesses in China. That is all right, he said. The 300-million middle-class group in China offers a handsome market, Mahathir added.