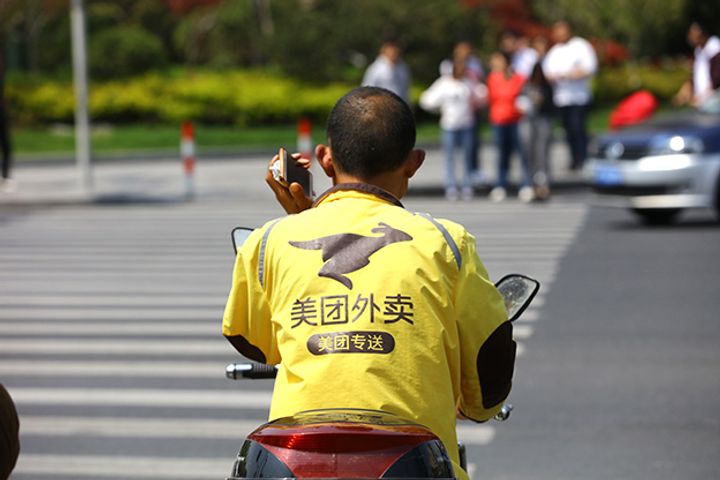 China Internet Plus Group, the Beijing-based firm behind the platform, showcased three unmanned vehicles at a conference yesterday, tech news outlet Ifeng reported. These include a concept vehicle for deliveries, another driverless vehicle named Xiaodai, which is already undergoing trials, and an airborne drone.

Tencent-backed Meituan employs an army of over half a million delivery people to distribute as many as 21 million takeout meals a day, incurring massive costs. By turning to AI and robotics, the company would be able to improve delivery efficiency while reducing costs, Senior Vice President Wang Huiwen said at the conference.

Company founder Wang Xing has long been interested in tapping unmanned technologies to help to bolster the firm's operations, stating in April, "Driverless cars and robots are not something that belongs to the distant future, and I believe that food delivery robots will emerge sooner than self-driving cars."

The move will intensify competition with Alibaba-backed rival Ele.me, which embarked on a CNY3 billion (USD443 million) promotional campaign last month as part of efforts to defend its position in the market. Tencent and Alibaba are two of China's biggest tech titans, and compete across a multitude of sectors to gather consumer data and provide seamless on-demand services. One of their best-known battles is in the bike-sharing sector, whose two biggest firms are backed by the pair -- Mobike by Tencent and Ofo by Alibaba.

There are three phases to developing unmanned distribution technology, Wang Huiwen added, describing them as lab experiments, mass production and profit making. Meituan is currently in the first phase, he said.

All hardware, software and cloud systems for the three robots were developed by Beijing-based Segway-Ninebot, Yicai Global learned. They feature a modular design, and the delivery box can be customized to enable intelligent mobility.

While unable to navigate stairs, the bot is capable of riding elevators. When the robot arrives at the entrance of a lift, it communicates wirelessly with the elevator's central control system instruct the people mover to stop at the desired floor.

"Implementation of unmanned delivery services bring technical challenges, the most challenging part being how to effectively combine technology with commerce and user experience, which is the reason why we decided to roll out an open-source platform," Wang noted.

In fact, indoor unmanned delivery robot technology has already been fully developed but requires honing through actual commercial applications, Segway-Ninebot co-founder Wang Ye told Yicai Global. "We need to train the robots with real food delivery orders, so as to test and debug them based on interactions between the robots, sellers and delivery staff in the real world."

Wang plans to sign up 10 to 20 business centers in the first-tier markets of Beijing, Shanghai, Guangzhou and Shenzhen within a year for test operations involving 10 bots at each location.

"For a certain period of time, delivery staff will work in conjunction with robots," opined Xia Huaxia, general manager of Meituan's unmanned delivery department. The robots can effectively complement manual delivery operations, as they can work non-stop -- at night, for example. On the other hand, deliverymen are more flexible and suitable for dealing with complex situations.