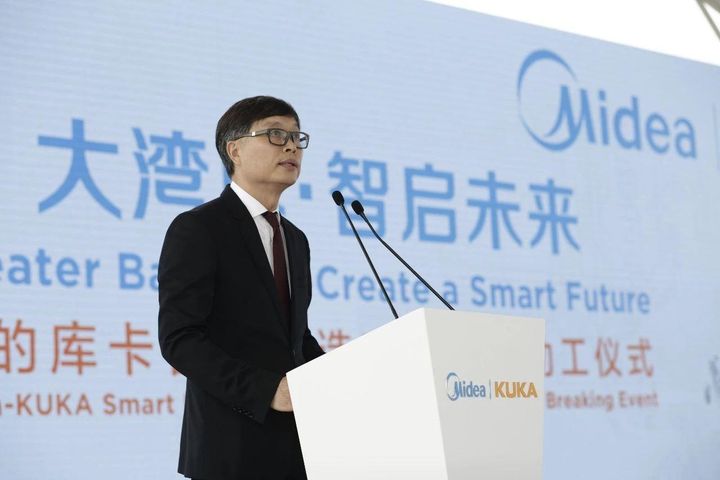 (Yicai Global) March 28 -- China's leading home appliance maker Midea Group Co. and the German robot giant KUKA Aktiengesellschaft kicked off construction of a robot manufacturing base in Foshan, the southeastern Guangdong province, today. It is the first major bilateral cooperation project since the Midea's acquisition of the German firm in 2016.

Among them, the intelligent manufacturing core area will introduce 25 to 40 upstream and downstream supply chain enterprises in the robot industry to build a gigantic industrial cluster, with total investment of over CNY16 billion (USD2.55 billion). The base will also provide high-end apartments and commercial facilities for experts and talents from Germany.

The establishment of the JV marks the first step in Midea's development plans after its acquisition of Kuka, said Fang Hongbo, chairman of Midea, in a company statement on March 22 when the home appliance maker announced the project first. The two companies will consolidate their advantageous resources to form a complete industrial chain and will continue to develop the industrial and consumer robotics market to promote the implementation of its "human-robot new era" strategy, Fang added.

"Kuka and Midea complement each other very well. The collaboration brings us closer to our goal of becoming number one in robotics in China," said Till Reuter, CEO of Kuka.

Midea acquired a 94.55 percent stake in Kuka for EUR4.5 billion (USD5.56 billion) in 2016. Founded in Augsburg, Germany, in 1995, Kuka is the world's leading industrial robot maker. The company's robots are widely used in automobile manufacturing by such carmakers as Volkswagen AG, Ford Motor Co. and Daimler AG.

China sold 87,000 industrial robots in 2016, up 27 percent year-on-year, making it the biggest robot market in the world in terms of annual sales, showed data from the International Federation of Robotics, professional umbrella organization. Sales of industrial robots are set to grow 15 percent to 20 percent per year over the next three years in China, it estimates.