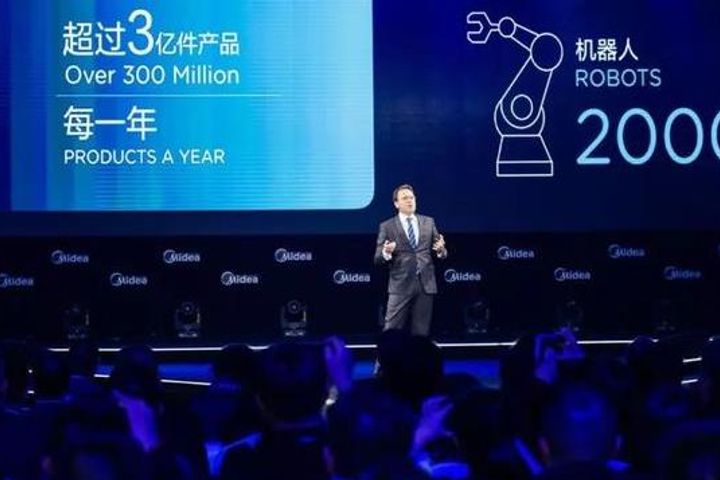 Midea's Robotics Revenue Is Expected to Rise to 30% in 3-5 Years, Executive Says

(Yicai Global) March 30 -- Major Chinese household appliance firm Midea Group Co. is gradually manifesting its ambition to develop its robotics arm. This business segment's revenue is set to reach one-third of its total revenue -- which is currently between 10 percent and 15 percent -- in the next three to five years, Olaf Gehrels, head of the company's robotics business, predicted in a March 7 interview with Yicai Global.

"The level of manufacturing in Europe is very mature; the level of China is still in the starting point, this brings unique opportunities," said Gehrels.

Midea Group, headquartered in Shunde, in China's southeastern Guangdong province, entered the home appliance industry in the 1980s, producing electric fans. It has now become aFortune 500 company. Midea is, however, not satisfied with just being an appliance maker. The company established an automation company in 2015 and acquired two major overseasrobotics companies, Germany's KUKA AG and the Israeli Servotronix Motion Control Ltd. in the following two years.

Midea proposed to develop Big Data and artificial intelligence technologies and apply them to its production processes to increase production efficiency at a strategic conference early this month and develop robotics technology for industrial and home use.

Gehrels joined Midea in 2016. He graduated from the Technical University of Munich and worked at large Japanese robot maker FANUC Corp. for more than 22 years. He was still proud to style himself a "German engineer" in the interview, however.

Industrial robots have broad market prospects in China, Gehrels told Yicai Global. Their market size in China will swell to 1 million units in 2025, per the forecast. Chinese domestic manufacturers will supply 50 percent of this demand. Midea will first introduce more robotic products within the group to enhance the existing level of automation following its acquisition of Kuka. The company plans to increase its use of robots to 7,000 units from 2,000 in the coming years.

Midea's robotics and automation business revenues hit nearly CNY20 billion (USD3.2 billion) in last year's first three quarters, making up about 11 percent of its total operating revenue, public data show. It is expected that its revenue and profit from robotics and its automated business segment will further rise with its deepening partnership with KUKA and their redoubled efforts to prise open the Chinese market.

Revenue from the robotic segment is expected to be one-third of Midea's total in the next three to five years, Gehrels predicts. It is now 10 to 15 percent.

Sales of industrial robots in China were about 87,000 units in 2016, with an annual growth rate of 27 percent. This will rise by 15 to 20 percent from this year to 2020, data from the International Federation of Robotics show. Midea and KUKA will establish three joint ventures to further promote the latter's business expansion in the Chinese market, they announced earlier this week. They will build a new production base in Shunde to achieve robot production capacity of 75,000 units per year by 2024. KUKA's robot production capacity in China by then will have attained 100,000 units per year.

Midea's vision for robotics gazes not just at industry, however, Gehrels advised, adding that robots will form a key component of transport, medical treatment and even smart homes.Midea's robotics booth occupied almost one-third of the company's total display area at China's Appliances & Electronics World Expo earlier this month. The company exhibited its medical and logistics-related automation solutions, as well as showcasing a six-axis robotic arm that mimics a human to serve beer.

With a medical robot arm, a physician can use a wearable device to replicate the movement of the human limb on a robot one via remote control, performing examinations of and even surgery on a patient thousands of miles away. The intelligent robot wheelchair demonstrated at the show obeys user commands, turns freely, automatically moves up and down, and can even turn into a simple bed, helping the user depend less on others and live more freely.

"In Germany and the EU the automation is very much focused on needs of the auto companies and supply companies for auto companies; here in China I see a unique opportunity and interest of people to take the concept of automation to other parts of the industry even the field of consumer homes," Gehrels said.

Many research and development staff are helping to realize Midea's technological shift, Gehrels also stressed. The company's R&D center has a total of 3,000 personnel, 25 percent of whom focus on research into robotics, with 250 dedicated to artificial intelligence, deep learning and other fields.

"That is a unique pool of R&D power that enables us to increase Midea's level of automation and develop a new market outside," Gehrels said.