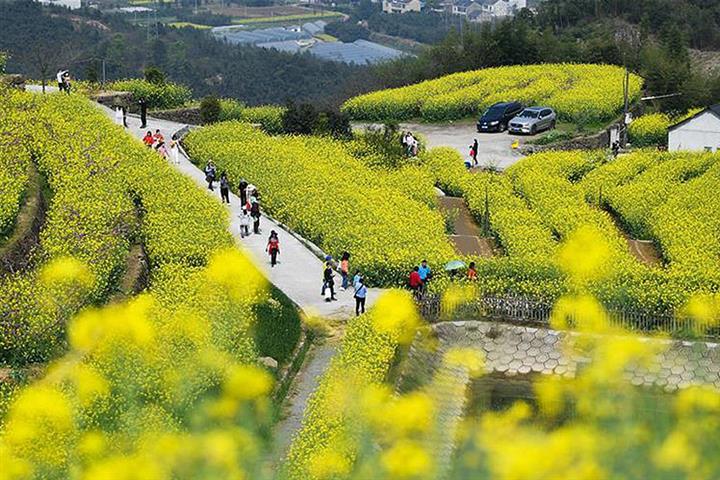 (Yicai Global) Feb. 23 -- China’s tourism sector is expected to rebound this year as the country is quickly recovering from the impacts of the Covid-19 pandemic with mass immunization.

Tourism revenue could climb by 48 percent in 2021 from 2020 while the number of outbound travelers may rise by 70 percent, the Ministry of Culture and Tourism's data center said in a report published yesterday.

The inbound and outbound market should recover to about 30 percent of pre-Covid-19 levels by December due to vaccine optimism, the report added. Last December, the government approved China National Pharmaceutical Group's Covid-19 vaccine for general use and millions of people have already been vaccinated in the country.

Inbound tourism figures are expected to increase by more than 50 percent in 2021. Meanwhile, international tourism revenue could rise by over 65 percent. The number of domestic tourists is expected to reach 4.1 billion, an increase of 42 percent from last year.

In 2020, the domestic market showed a U-shaped recovery pattern as short excursions and road trips became popular. Moreover, consumers were inspired by the increasingly digital offerings while northwestern China became a top destination.

Last year, the number of Chinese tourists fell by over 52 percent to 2.9 billion from a year earlier due to the pandemic, according to the ministry. Domestic tourism revenue declined by over 61 percent to CNY2.2 trillion (USD340.6 billion).

Fewer people came to China amid travel restrictions. The number of inbound tourists dropped by over 81 percent to 27.2 million in 2020. International tourism revenue totaled USD17 billion, a decline of more than 87 percent. The number of Chinese citizens traveling abroad was 20.2 million, down almost 87 percent.