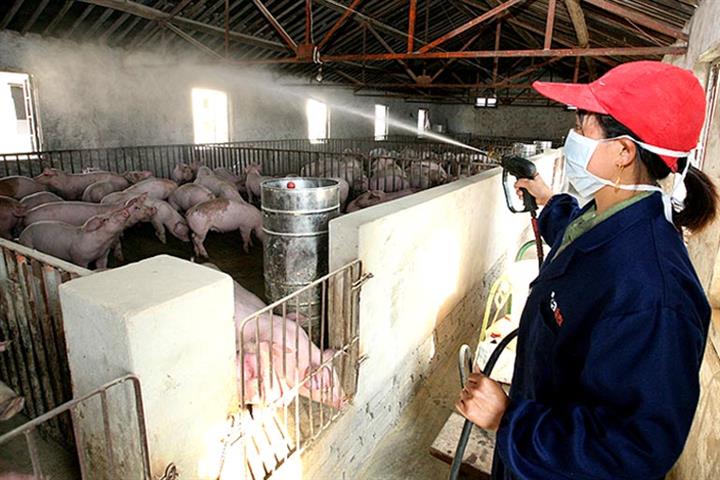 New Swine Flu Is No Cause for Panic, Chinese Scientist Says

(Yicai Global) July 2 -- So far there is no evidence of human-to human transmission of a new swine flu virus, dubbed G4, according to the Chinese scientist whose team published its discovery that the virus can jump from pigs to humans, triggering widespread fears that it has the potential to cause a similar pandemic to Covid-19.

We are not yet at the stage of human-to-human transmission, Liu Jinhua, professor at the China Agricultural University's College of Veterinary Medicine, told Yicai Global. The pig farm workers who tested positive for the virus did not show any symptoms and there were no cluster infections among them, he said.

At present, its contagiousness is limited, Liu said. Human antibodies may turn positive to the virus after exposure, but it is still very difficult for it to replicate in the body and cause illness.

His team’s report, published in the Proceedings of the National Academy of Sciences of the United States of America on June 29, serves as a reminder and a warning, Fan Fuhao, a researcher at the Ministry of Agriculture and Rural Affairs, told Yicai Global.

"It doesn't mean there is going to be an outbreak of swine flu among human beings, and I hope the media won't hype it up," Fan said.

This paper's value is that it sounds an alarm, an expert in animal epidemiology told Yicai Global. By reporting cases of human infection with the G4 virus early, it is possible to keep a close eye on whether this leads to human-to-human transmission, he said.

Since 2016, a recombinant swine flu virus called G4 began to increase and gradually took hold of China's hog population, according to the research paper titled Prevalent Eurasian Avian-Like H1N1 Swine Influenza Virus with 2009 Pandemic Viral Genes Facilitating Human Infection. The virus has been detected in pigs from at least 10 provinces, it added.

The G4 virus' prevalence among pigs inevitably increased its exposure to humans, said the paper, which was compiled by research teams from CAU, led by Liu, and the Chinese Center for Disease and Prevention, led by Gao Fu.

Some 35 out of 338 pig farmers, or 10.4 percent, tested positive for the virus. Seroprevalence, or the level of a pathogen present in a population as measured in blood serum, was as much as 20.5 percent among 44 workers aged between 18 to 35, meaning nine of them tested positive. Seroprevalence in the general public was 4.4 percent.

Lab results show that the pathogenicity of the G4 virus is stronger than that of the ‘pure’ Eurasian avian virus in earlier epidemics. Pig farms should therefore pay attention to the prevention and control of this disease, Liu said.

Chinese pig breeders have in fact started to pay much more attention to pathogenesis since the devastating outbreak of African swine fever among their pig herds in late 2018, and have greatly suppressed the spread of the G4 virus and other infectious diseases among their hog populations, Liu added.

But from the perspective of public health, though only a few infections have been reported so far, there are people who have been infected with the virus, Liu said. The threat is there and we need to stay alert, he added.