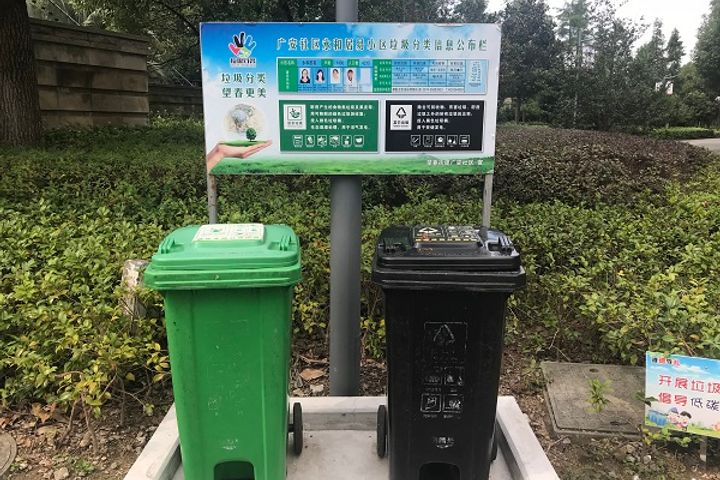 (Yicai Global) Oct. 18 -- A trash-sorting scheme in Ningbo, a port city in eastern China, has enabled waste handlers to more easily classify garbage across 82 percent of the city by rewarding residents for putting their rubbish in QR coded bags.

Ningbo's recycling rate was at 30 percent as of the end of July, with a harmless treatment rate of 100 percent, according to data collected by Yicai Global. Residents in 666 neighborhoods across the city were handed trash bags with QR codes on in 2013, and have been rewarded for correctly sorting their garbage before disposing it.

The QR codes contain data describing, for example, whether a bag should contain food or non-food waste. Residents can scan the bag on a machine at the receptacles, and the smart system will open the appropriate container for disposal. Residents earn points for correctly disposing of their trash, and attendants can check the bags to ensure they contain the right kind of waste.

Families are rewarded with up to 15 eggs if they fulfill all requirements.

Hangzhou, renowned as the home of e-commerce giant Alibaba, has also adopted an intelligent approach to its waste treatment and logistics systems to promote waste sorting. It has installed smart management systems on seven garbage trucks since February 2018 to cover 329 pickup locations, and plans to roll out over 100 more by the end of this year.

The systems automatically record when trash was collected and send this information to a garbage management center and the Hangzhou Urban Appearance Environment Health Supervision Center.

"The system will improve the efficiency of garbage removal," said Zhu Huajun, chief engineering of the firm behind the systems -- Hangzhou Drilling Machine Manufactory. "You can check photos of pickup points if needed, and you'll be able to see if there's any wrongly-disposed-of trash."