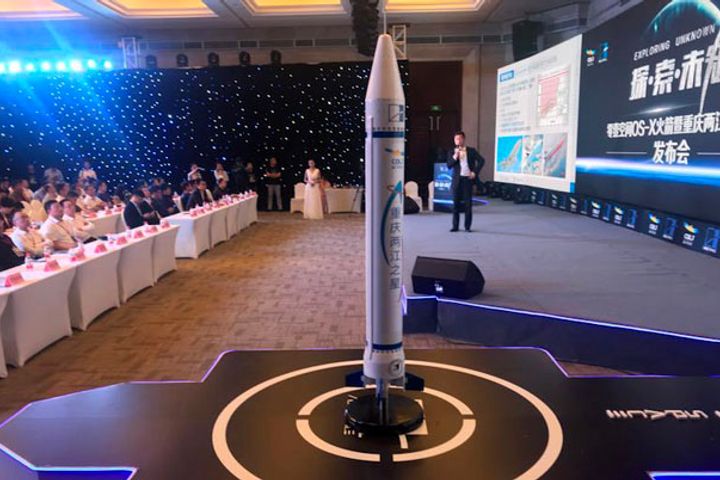 (Yicai Global) May 9 -- Chongqing One Space Aerospace Science and Technology Co. (OneSpace), China's answer to Elon Musk's SpaceX, will conduct the maiden flight of its OS-X ship on May 17, marking the country's first launch of a privately-developed commercial rocket.

"The rocket has been transported to the test field and is preparing for its first launch on in just nine days from now," Chongqing Times cited One Space Chief Executive Shu Chang as saying. "We have a 90-percent chance of success regarding meeting our client's demands of the test."

The firm will conduct the launch at its headquarters the western municipality of Chongqing's Liangjiang New Area and held an event yesterday to unveil its independently developed OS-X spaceship.

The commercial space sector has taken off globally in recent years, driven by government subsidies aimed at bringing down the massive costs associated with the sector. 2017 was widely regarded as a watershed year for the private space race as venture capitalists injected USD3.9 billion into the sector dominated by Musk's SpaceX as well as satellite communications providers OneWeb Ltd. and O3b Networks Ltd. The average cost of a commercial launch is expected to fall to USD4.6 billion by 2025, USD2.4 billion less than government launches, a report from aerospace investment group Space Angels Ltd. says.

China's own private space sector is expected to see explosive demand for satellites spanning industrial and commercial sectors. Demand is forecast to far outstrip existing launch resources, thereby creating a significant gap in the market that OneSpace aims to fill with its OS-X series. The firm aims to cut launch prices in half in the short-term future.

OneSpace can add various types of control mechanisms such as gas rudders, air rudders and attitude and orbit control systems to the OS-X rocket, President Ma Chao said at the event. They can also be customized to various trajectories in flight tests and be used to conduct microgravity tests, reentry tests and high-speed technology verification.

One Space has already signed launch agreements with multiple domestic and overseas clients. Orders related to its M-series rockets are set for 2020 launches while those for its X-series will be ready by 2019. It has also established partnerships with a number of satellite companies in Europe and Asia, and expects to be capable of conducting launches of over 30 M-series and more than 20 X-series rockets annually by 2020.