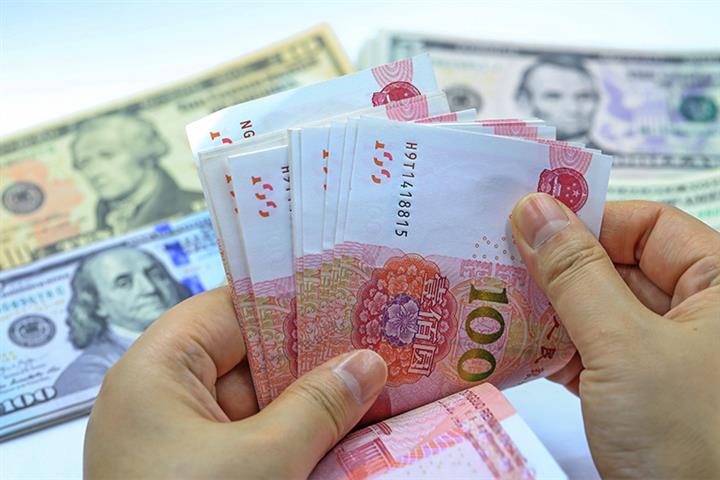 Onshore Yuan Strengthens to Below 6.7 Versus US Dollar Amid Big Capital Inflow

(Yicai Global) Jan. 17 -- The Chinese yuan appreciated to below 6.7 for a while yesterday against the US dollar, the strongest since last July, as domestic stock indexes jumped, buoyed by a large inflow of offshore capital.

There has been a clear correlation between the yuan-dollar exchange rate and offshore capital flowing into the Chinese mainland market via the Stock Connect program with Hong Kong since October.

Funds flowing into the Shanghai and Shenzhen markets from Hong Kong via the Stock Connect have reached almost CNY80 billion so far this year, close to the CNY90 billion for the whole of 2022, according to data. In the first half of January, the yuan appreciated about 2.4 percent against the greenback, with the yuan-dollar exchange rate up almost 6,000 points from the lowest point in early November.

Expectations for China’s economic recovery are the main factor supporting the strengthening of the redback. There is still space for a further increase in offshore capital influx into mainland stock markets, given that the yuan-denominated asset position held by offshore capital remained relatively low despite the yuan’s appreciation, Becky Liu, head of China macro strategy at Standard Chartered Bank, told Yicai Global.

Another reason behind the rebound of the yuan-dollar exchange rate is the weakening of the US Dollar Index. The pace at which the yuan appreciated against the dollar over the past two months is unusual, said Wu Zhaoyin, macro strategy director at Avic Trust. Behind such a pace is the big decline of the US Dollar Index as well as market corrections to the falling yuan caused by an inverted China-US spread since last April, he added.

The yuan appreciation and the fall in the US Dollar Index occurred almost simultaneously and to similar extents. “The yuan rate's sway will mostly follow changes in US Dollar Index in the short run,” said Zhu Yanhua, a foreign exchange business expert at a big Chinese bank.

This round of offshore capital influx targets those stocks with a track record of stable earnings and good growth prospects, such as Kweichow Moutai and Ping An Insurance Group, Wu noted. The inflow did not benefit the stocks of companies involved in the new energy, new energy vehicles, and other fields in which domestic funds heavily invest.

Investors are divided about the quick recovery of the Chinese yuan against the US dollar and domestic stock markets. Some are concerned that the optimistic expectation for a smooth restart of the domestic economy has already factored in the exchange rate and stock prices.

The yuan's steep increase may curb exports, building pressures on follow-up financial market conditions, various traders and strategists at overseas banks told Yicai Global. It is possible that the weakening of the redback from an intraday high yesterday afternoon was the result of profit-taking by some traders.

The recent appreciation of the redback versus the dollar is mainly driven by expectations, Liu pointed out, adding that further yuan appreciation will be curbed if certain reverse risks begin to materialize in the second quarter.

“Overseas hedge funds have been relatively active in grabbing positions recently, while actively managed mutual funds that value long-term investments more are still standing on the sidelines,” Xu Fei, strategy director at Vanguard, told Yicai Global. “Due to the speedy rebound in main stock indexes, the market’s valuation has already changed to ‘relatively reasonable’ from ‘much undervalued’ before the recent run-ups.”

International long-term funds are generally relatively conservative, with the decisions more easily impacted by geopolitical factors, Xu added, noting that a sustainable return of funds from oversea players will still take some time.