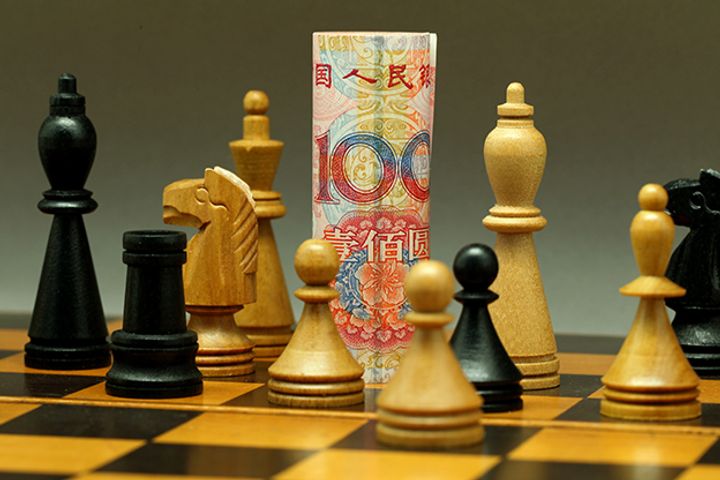 (Yicai Global) Aug. 27 -- China's central bank has gone back to a formula for fixing the yuan's central parity rate versus the US dollar that it stopped using at the start of the year to help tackle downward pressure on its currency.

Banks that provide quotes for the daily fixing reintroduced the counter-cyclical factor at the start of this month to adequately hedge the pro-cyclical fluctuations in market sentiment, the China Foreign Exchange Trade System, which is run by the People's Bank of China, said in a statement late on Aug. 24. The move will help to maintain the smooth operation of the forex market, analysts said.

In order to better reflect supply and demand, in May last year China added the counter-cyclical factor to the quotation model that consisted of the closing price and the exchange rate movements of a basket of currencies. The banks then successively adjusted the counter-cyclical factor to a neutral level based on their assessment of economic fundamentals and market conditions, the CFETS statement said. The formula stopped being used in January, it said.

China's economic performance is stable and turning around, creating favorable conditions for the yuan to remain basically stable at an adaptive and even level, the statement added. Because of the strong dollar and trade frictions, the foreign exchange market has seen some pro-cyclical behavior of late. Based on their assessment of market conditions, the banks have again been adjusting the counter-cyclical factor to hedge pro-cyclical sentiment.

If the forex market experiences any sharp irrational fluctuations in the near term, it could trigger large cross-border capital flows and shake market confidence, threatening the stable operation of China's macroeconomy, said Wang Qing, chief macro analyst of Golden Credit Rating International. That's why the central bank has pushed ahead with a market-oriented exchange rate while setting a prudent macro policy framework for forex and cross-border capital flows, he added. The bank has also strengthened communication with the market, managed market expectations, and restrained yuan exchange rate fluctuations by a large margin, Qing said.

Last week, the central parity rate went through drastic ups and downs; from 6.8718 on Monday, rising in the following four days and once breaking through the 6.83 mark. Friday saw a sharp pull back to 6.8710, 343 points down from the day before, as well as an historic low since Aug. 3. Meanwhile, the spot exchange rate, which is a pre-agreed rate between two parties, was volatile with improved flexibility.

The dollar should depreciate in the next two to three years for three reasons, Xu Changtai, Asia chief market strategist at J.P. Morgan Asset Management, told Yicai Global. The first is that there is a huge trade deficit in the American current account. President Donald Trump's comments on the dollar exchange rate make the prospects relatively bearish, and technically, many speculators in the global market hold a large amount of net long positions in the US dollar. Under such circumstances, bullish momentum will gradually weaken.

Against the US currency's stability and even depreciation, the yuan will stabilize or appreciate accordingly but the increase will not be large, Xu said. Analysis suggest the yuan exchange rate will not depreciate consistently and instead it is expected to rally before year-end, said Wang Youxin, a researcher at the international finance institute of the Bank of China.

The exchange rate is mainly determined by market supply and demand. Since last year, the exchange rate has gone through ups and downs, and flexibility has improved significantly, Li Bo, director general of monetary policy department of PBOC, said at a press conference on Aug. 21. "What we focused on is to give full play to the market in determining the renminbi (yuan) exchange rate. We shall never resort to competitive deprecation, nor will we use the exchange rate as a tool to deal with foreign trade frictions or other external impacts," he said.

The PBOC will also hold onto the 'bottom line' while maintaining flexibility in the exchange rate, if necessary, making appropriate counter-cyclical adjustments to forex supply and demand through prudent macroeconomic policies, so as to secure a steady operation of the market, Li added. "The renminbi exchange rate is ultimately determined by economic fundamentals, which are promising in light of China's economy. The Chinese government is confident and also capable to maintain the renminbi exchange rate generally steady within an appropriate and balanced range."

Even though yuan flexibility has improved, the scale of bilateral volatility will not intensify in the short term, according to Xu Changtai. "I think, it [flexibility] has improved sufficiently, which has already aroused investors' interest in hedging instruments. However, if an intensive volatility occurs in the market, it will surely impact investors' confidence, and further impact the entire market."