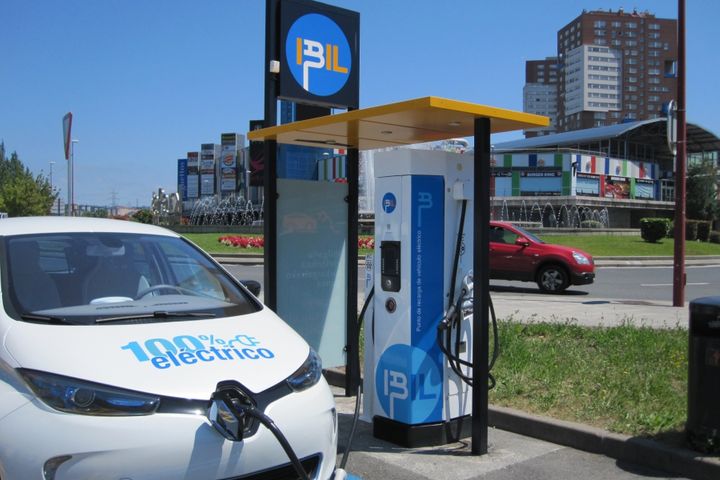 (Yicai Global) Dec. 3 -- Spain deploys a network of charging points to foster electric mobility. Sustainable transport is one of the key elements of the European Union's plan to reduce greenhouse gas emissions.

The deadline has been set. As a member of the European Union, Spain has committed to reducing its greenhouse gas emissions by 26 percent in 2030, and by 80-95 percent before 2050. Achieving these goals will not be easy, and transportation is key. Among other measures, the country will need to change its vehicles and, above all, expand its electric charging infrastructure. Aside from electric vehicle prices and autonomy, extending the charging network is one of the most significant changes necessary for electric mobility to become a reality in the coming years.

To comply with the EU's objectives, some 300,000 electric cars will be needed by 2020, as well as 11,000 fast or semi-fast charging stations, as reported by the consultancy firm Deloitte. Further growth will be exponential: estimates show that by 2030, there should be close to six million electric vehicles and 50,000 charging points. Today, Spain counts nearly 30,000 electric vehicles and the most optimistic estimates show there are around 4,000 public, private and corporate charging points. There is still a long way to go, but Spain is on the move.

Major energy companies are designing infrastructure to offer electric vehicles greater autonomy and to seize the business opportunities of an emerging market that is driven by a relentless energy transition. Spanish electricity company Iberdrola, for instance, is now creating the largest fast-charging network on Spain's main expressways and highways, investing more than 10 million euros (USD 11.5 million). It will install, in little more than a year, over 200 fast, super-fast and ultra-fast charging stations. The project will cover all six national highways and three highways – the Mediterranean, the Cantabrian and Ruta de la Plata – reaching all provincial capital cities as well as public access points in the country's main cities.

"Our focus is on public access, fast-charging stations because electric vehicles need to become an option for long distance travel as well," says Raquel Blanco, Smart Solutions Global Manager for Iberdrola. The project anticipates installing a total of 25,000 charging stations for public, private and corporate use over the next four years. The average price for a private individual to install a charging station at home is 700 euros plus 500 for a plug extension, Blanco adds. "Energy becomes 10 times cheaper than regular fuel if the connection is made at home." And it is entirely green.

With a total of 1,500 stations installed, 600 of which are public access, the energy company Endesa plans to add 4,300 public access, fast-charging points. The first stage of their project consists in deploying 700 stations as part of the EU program Connecting Europe Facility (CEF), 60 percent near highways and the remaining 40 across cities.

Ibil, which is 50 percent owned by oil company Repsol and the Basque Energy Entity, has 1,300 operating points in Repsol service stations, 200 of which are public. Although Spain falls behind other European countries, Aitor Arzuaga, Ibil's Managing Director, is optimistic. "From January to August 2018, electric vehicle sales have soared nearly 54 percent, and sales of vans and pickups almost 97 percent." Arzuaga also participates in the European project E-Via Flex-E, consisting of a pilot network of 14 ultra-fast charging stations on a number of roads in Spain, France and Italy, and coordinates CIRVE, the electric vehicles fast-charging Iberian corridors infrastructure, another European initiative that seeks to establish 40 multistandard stations along the Atlantic and the Mediterranean.

Other companies have gone the extra mile, publicly announcing their intention to install charging stations at no expense for Spanish towns. Factor Energía, a retail electric power and natural gas company, and the group Sifu, that provides services to property owners' associations, have signed an agreement to develop infrastructure free of charge for local residents. The agreement includes providing residents who opt to have a charging point on their private parking spot the possibility to pay for their connection in installments over two years. Factor Energía also manages public subsidies for the town's residents and organizations.

Emilio Rousaud, general manager of Factor Energía, says that currently, Madrid and Barcelona are their top priority. "Both local governments promote sustainable mobility. We have already started and, by 2019, we expect to work with some 1,300 towns and install 2,400 charging stations."