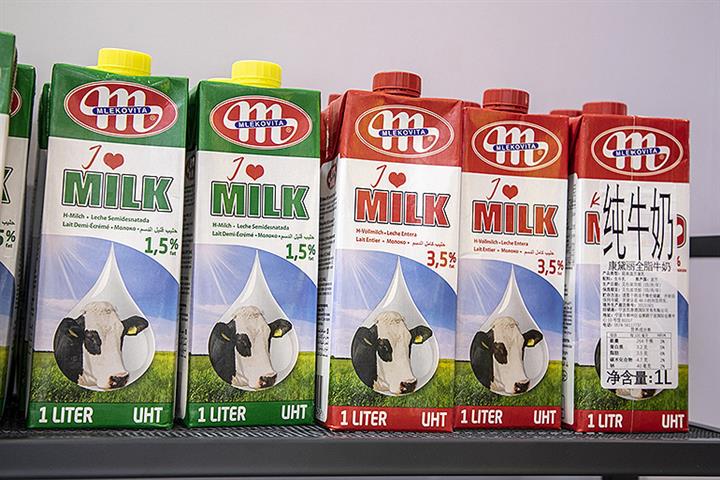 (Yicai Global) June 10 -- Poland’s milk exports to China more than doubled in the first quarter of this year, according to Andrzej Juchniewicz, chief representative of the Poland Investment and Trade Agency’s China Office.

China and countries in central and eastern Europe have strong economic complementarities, especially in the fields of food and farm produce, he told Yicai Global at the second China-CEEC Expo and International Consumer Goods Fair in the port city of Ningbo.

China is the world’s largest importer and second-largest trader of agricultural products. Its farm trade with central and eastern European nations rose 2.1 percent to about USD1.5 billion last year, according to Chinese customs data. Imports contributed around USD700 million, an 11.9 percent annual gain.

The China-CEEC Investment and Trade Expo, China’s only state-level exhibition targeting central and eastern European countries, runs from June 8 through 11.

Europe’s demand for dairy products fell sharply after the Covid-19 outbreak, which had a huge impact on Poland’s dairy industry, which is heavily dependent on the European market, Juchniewicz said.

Many dairy farmers had to reduce their stock to control losses. But due to strong demand in China, a significant number pared their losses. According to Poland’s finance ministry, dairy product sales to China surged 70 percent last year.

Surging agricultural trade between the two countries bucked the downward trend, thanks to the unique role played by the China Railway Express, also known as Trans-Eurasia Logistics, during the pandemic prevention and control period.

The cold-chain facilities of CR Express are suitable for moving livestock products, fruits and vegetables as well as dairy produce and the service shortens the time it takes to ship to China from Poland to about 14 days from 40 days by sea.

Apart from quality, Polish milk also has a price advantage, Juchniewicz said, adding thatPoland has relatively low labor costs. The price difference between Chinese and Polish milk can reach about CNY5 (78 US cents) per liter, according to Chen Yiye, general manager of Ningbo Dijia Vida Trading.

Meanwhile at the expo, Michat Sliwinski, marketing manager of the China office of Polish down fillings supplier Animex, was tidying up the duvet on a bed with a steam electric ironing machine.

Speaking in fluent Chinese, Sliwinski told Yicai Global that the company now exports goose down to Japan and European countries, and its clients include renowned down jacket brands such as Moncler. The company hopes to find business partners and collaboration opportunities in China through taking part in the export, he added.

Unlike Sliwinski’s company, which is directly involved in sales, Yicai Global learned that many exhibitors are managed by dealers in China. The exhibition has attracted 500 exhibitors, 30 percent of which are domestic agents of firms, Ningbo Mayor Qiu Dongyao told reporters in May.

Cost considerations have prevented many Polish companies from setting up their own representative offices in China, Juchniewicz said. Most of these firms rely on agents or resellers for distribution.

He said this model was feasible in the early stages of the opening up of the Chinese market, but to further establish the Polish brand effect, companies should set up offices to better understand the Chinese market.