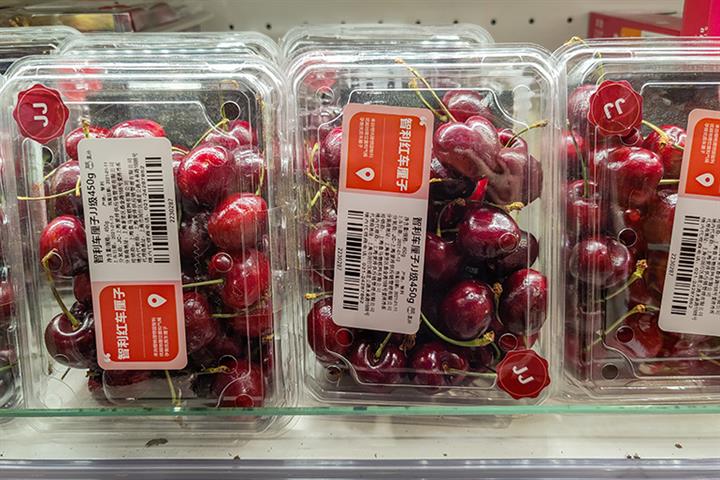 (Yicai Global) Jan. 28 -- The price of cherries in Shanghai has crashed since traces of the Covid-19 virus was found on the inner packaging of a batch being sold in Wuxi, southeastern Jiangsu province last week, the Shanghai Observer reported today.

“The price for 2.5 kilograms of double J black cherries imported from Chile was CNY199 (USD30) a week ago. Now it is CNY119?” said a customer at a Hema Fresh grocery store in Shanghai’s Pudong district, who could not believe his eyes.

Even lower prices can be found. Five-kilogram boxes of double J cherries in some outlets were selling for CNY140 (USD21), and bigger triple J ones could be bought for CNY180.

Sweet, juicy cherries are hugely popular in the run up to the Chinese New Year holiday, which starts on Feb. 11 this year. China gets most of its cherries from Australia and South America.

However, after the packaging on some imported cherries was found to be contaminated, sales have plummeted. One week ago, the fruit accounted for 10 percent of sales at some stores. But this has now fallen by 40 percent, the Shanghai Observer reported. In some cases there were no sales at all, it added.

“There is more chance of being in an air crash then being infected with Covid-19 by buying imported goods,” said infectious disease specialist Zhang Wenhong in an attempt to ease the hysteria among the public.

The low prices are also due to an increase in supply, the head of a fruit importing firm told Yicai Global. The wholesale price of the latest imported batch at the beginning of the year was 30 percent lower than the previous batch last year as cherry output in Chile and other countries is growing, he added.

Cherries are our best-selling fruit during the Lunar New Year and we cannot abandon it because no other domestic or imported fruit can compete with it, a staff member at a Hema Fresh store in Shanghai said.

Huizhan Fruit and Vegetable Market, Shanghai’s largest market for imported fruits, is only accepting cherries that have four certifications, namely a customs clearance, proof of quarantine, proof of disinfection as well as Covid-19 tests.

There are around 100,000 tons of the sweet delicacy on their way to China from South America. A third of this will be consumed by residents in eastern China.

The shelf life of cherries is less than two weeks, a market insider said. If they do not sell, they will end up in the rubbish bin.