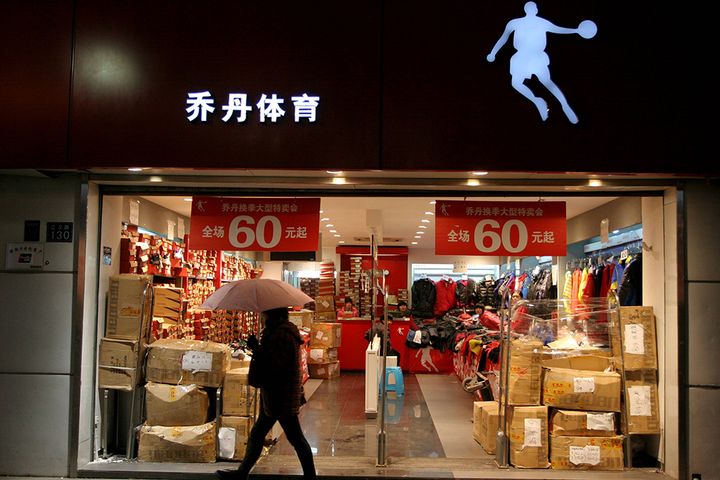 Qiaodan Grabs the Rebound, Takes Jordan and His Lawyers to Court, Seeks USD165,000 and an Apology

(Yicai Global) July 20 -- The infringement squabble dribbling between Qiaodan Sports Co. and basketball legend Michael Jordan has once again bounced over into the spotlight.

This grudge rematch, though, ain't one-on-one.

Qiaodan decided the defendants, via this demand letter, had gotten up in its face, dissed it and all but called it a punk and a chump, so it haled Jordan and his law firm Fangda Partners (Beijing Office) onto the court, or rather into court -- its home court, in fact, of Quanzhou in China's southeastern Fujian province.

The knock-off sports shoe peddler is now demanding that the defendants desist from their dastardly defamatory deeds, apologize and restore the company's reputation. This last demand represents a rather tall order, a legal analyst with knowledge of the case has assured Yicai Global.

Qiaodan is also asserting compensation claims for emotional distress -- yes, companies in China do have feelings, even those unable to recognize that humans may also -- and to recoup expenses incurred in protecting its "rights" in the amount of USD165,000 (CNY1,100,000).

China's Supreme Court passed an underlying Dec. 8 judgment on the 10 administrative disputes arising over the trademark covering the name Michael Jeffrey Jordan. The Court held that Jordan owns the rights to his own name only as it is transliterated into Chinese and written in Chinese characters (乔丹), but not as it appears in the Romanized Chinese phonetic script (Hanyu Pinyin) as 'QIAODAN' and 'qiaodan,' respectively. It thus allowed Qiaodan to keep using the trademark Jordan claimed constituted infringement, except ironically in its Chinese-character version, to which the court conferred on Jordan exclusive rights. This ruling must have left the NBA icon feeling flabbergasted and with his tongue hanging out, this time in shock.

Qiaodan was understandably feeling a tad ornery because the earlier legal action had delayed its much-anticipated listing on the Shanghai exchange, after the China Securities Regulatory Commission (CSRC) had awarded it a free throw. The bourse was of course feeling a bit antsy about Jordan pulling off a snatch job to reclaim His Airness' own name -- Qiaodan's only real asset, which is paradoxically an intangible one.

Shanghai Fangda Partners (Beijing Office) then served the demand letter on Feb. 9. It invoked Jordan's intellectual property rights and urged the organizing committee to slam-dunk Qiaodan as an event sponsor and break its backboard, the official Global Times reported. Qiaodan countered that the letter was inconsistent with objective facts and the Supreme Court's decision, twisted and imposed a warped interpretation on the wording of court rulings, disparagingly commented on and even wantonly defamed the company's reputation in a blatant attempt to tortiously interfere with and seek to unlawfully end its cooperation with the Sports Bureau of Tianjin Municipality and the organizing committee. It further charged that Fangda Partners (Beijing Office) had sloughed off its due professionalism and diligence by "confounding wrong with right, misleading others, and impairing the firm's reputation."

Qiaodan had, mind you, among its 100 alleged infringements also registered the names of Michael Jordan's sons as trademarks and his jersey, which the Chicago Bulls retired -- number 23 -- thus quite literally stripping the very shirt off his back. This numerological talisman now appears as a frequent adjunct in Qiaodan's ads.

The sums at stake are huge, as Jordan's status as a household name in China suggests. Basketball is extremely popular and Qiaodan has outlets all over the country, but no public information is available pre-listing as to its earnings or market value. Both however must be vast or CSRC would never have given it the go-public whistle.

The ref's decision in this first half is now still 'up in the air.' Whatever the outcome, however, Jordan v. Qiaodan -- like Dickens' oddly-homophonic case of Jarndyce v. Jarndyce -- seems fated to enjoy considerable longevity, and it is undoubtedly bunched up to bounce back up to the Supreme Court once again, at least.

Whether this case will ultimately be inducted into the Hall of Fame or of Infamy presents another question entirely.