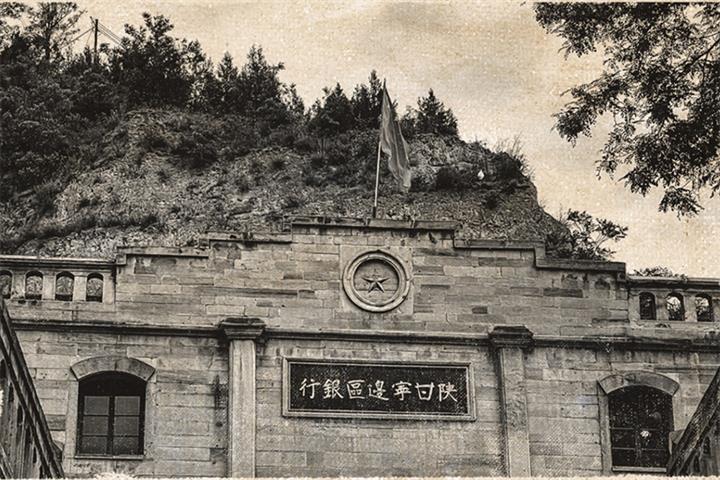 (Yicai Global) June 29 -- The Chinese Red Army’s first bank following the Long March was a series of cave dwellings, otherwise known as yaodong, cut into the Phoenix Mountain in the revolutionary stronghold of Yan’an, deep in central China.

Set up in 1937, the Shaan-Gan-Ning Border Region Bank’s main task was to take deposits. It became the de-facto monetary authority in the border region between Shaanxi province, Gansu province and Ningxia Hui Autonomous Region in February 1941 when it was authorized to issue regional currency.

The issuance of its own currency helped to break the Kuomintang’s economic blockade, Liu Ping, researcher at Fudan University's Center for Chinese Financial History and the Party Secretary of Committee for Discipline Inspection at China Guangfa Bank's Hangzhou branch, told Yicai Global.

It provided an economic lifeline to ensure the supply of capital and played a key role in the establishment and development of an independent economic system, Liu added.

The bank lent money to local farmers to purchase cattle, grow cotton, build reservoirs and buy equipment. Farmers could also borrow material objects and repay with either paper notes or the returned goods.

One of the regional bank's main features is that it was willing to lend money or objects to poor working-class people who might not be able to pay off their debt in order to help them stay productive, Wei Xiewu, founder of the Shaan-Gan-Ning Border Region Bank Memorial Hall, ex-vice governor of the People's Bank of China's Yan'an branch and an expert on the financial history of the Shaan-Gan-Ning Border Region, told Yicai Global. This provides an important reference for today's inclusive finance, he added.

Such diversified forms of loans, introduced in accordance with the actual situation on the ground, not only enhanced the prestige of the Party and the border region government among locals, but also encouraged farmers to produce.