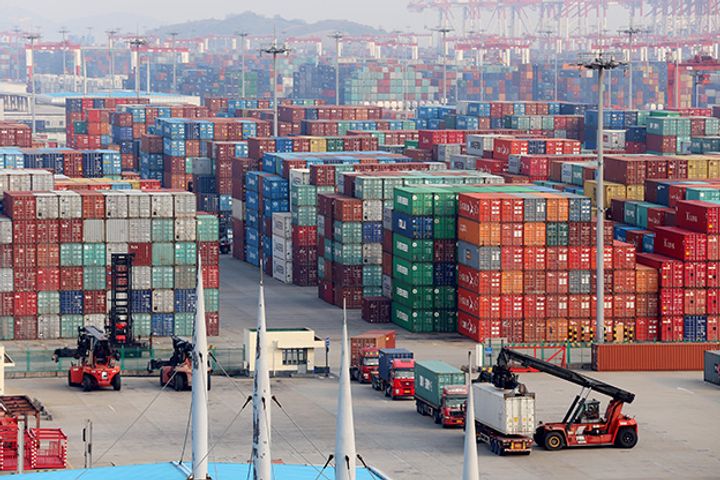 Regional Trade Can Move to a Higher Level

(Yicai Global) Oct. 27 -- Asia has become one of the world's most dynamic trade markets and the powerhouse of global commerce, but plenty of room remains for improvement.

Asia's share of the total global trade volume reached an unprecedented level last year, Asian Development Bank (ADB) declared on Wednesday. Strong regional trade and investment growth has served as a buffer protecting Asian countries against the impact of uncertainties over global trade and economic development, the bank noted in its 2017 Asian Economic Integration Report released Oct. 25. Asia's regional trade volume as a percentage of the global total rose from 55.9 percent between 2010 and 2015 to 57.3 percent last year to hit an all-time high.

Asian countries have benefited from trade development. East Asian nations saw a significant improvement in national economic growth driven by the strong development of international trade over the past several decades. Asia has outpaced other regions in economic integration during this period, an expert at the International Monetary Fund (IMF) noted. Regional trade in the continent grew by more than 10 percent each year on average from 1990 to 2012, double the growth rates of other parts of the world, added value figures indicate. The level of economic integration in Asia also scaled up steadily. The past 20 years witnessed consistent increases in business cycle synchronization among Asian economies. The degree of 'growth relevance' between members of the Association of Southeast Asian Nations (ASEAN) is almost at the same level as that between EU countries.

Apart from contributions by the major economies in the region, the impressive trade growth is attributable to Asian nations' embrace of international trade and globalization more enthusiastically than most other geographic areas.

However, the volume of transnational trade in Asia has been in flux at times. For example, the reliance of Asian economy overall on trade between Asian countries fell from 55.65 percent in 2014 to 51.48 percent in the following year.

Therefore, Asia needs to further improve its performance in global trade, reduce fluctuations and achieve sustainable growth. In this respect, China, as the second-largest economy in the world and the largest in Asia, has a big potential to tap.

China has remained a firm advocate of globalization despite the ups and downs in the global trade and investment markets. It is determined to create an open global economy to share opportunities and drive mutually-beneficial development, President Xi Jinping said at the annual conference of Davos World Economic Forum in Switzerland earlier this year. The country will continue to resolutely promote free trade and investment, thereby creating a favorable environment for trade and investment liberalization and facilitation, he added. China has also adopted a firm position against protectionism. "We will never reach the finish line if we retreat to the harbor every time we encounter a storm." The Chinese government reiterated in its report to the recent 19th National Congress, openness brings progress, and a closed-door policy will cause us to lag. China will never shut the door on international cooperation and trade.

On a more practical level, China has been instrumental in establishing the Regional Comprehensive Economic Partnership (RCEP), the China-Japan-South Korea free-trade zones, the One Belt, One Road initiative and the Asian Infrastructure Investment Bank. All of them are new platforms to promote trade development in Asia. Introducing these regional and international mechanisms is of course no easy task.

The biggest challenge facing Asia's trade is the lack of effective rules and systematic arrangements. It takes hard work and, more importantly, visionary leadership to improve the quality of trade activities in Asia. Take the RCEP for example. Negotiations are now being held between ASEAN and six countries (China, Japan, India, South Korea, Australia and New Zealand) that have signed bilateral trade treaties with it. The partnership aims to create the biggest trade alliance in the world, and its members make up some 40 percent of global trade, but the talks suffered serious setbacks due to marked differences in socioeconomic development between the countries. A consensus has yet to emerge on the standard of liberalization for trade in goods.

The world now has 15 existing major regional free-trade treaties, and another 20 or so are being negotiated or undergoing feasibility studies. Forging international treaties is an important way to create new global trade systems, as well as improve the quality of trade activities in Asia. RCEP will take ship with continuous efforts by China and other Asian nations, provided that these countries are willing to deepen their understanding of the rules and of trade systems.