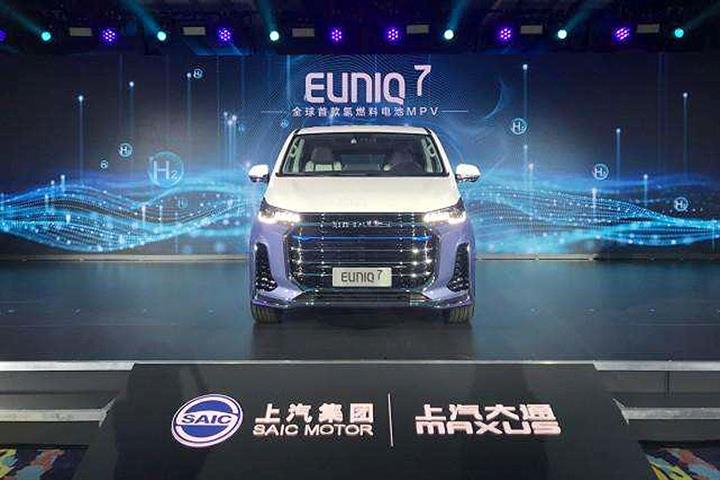 (Yicai Global) Sept. 14 -- SAIC Motor released its first hydrogen strategy plan for China's auto industry yesterday, in which it announced it will produce and sell 10,000 hydrogen fuel cell vehicles per year by 2025 to take a more than 10 percent market share and the lead in China's independent hydrogen fuel cell technology.

The Shanghai-based company intends to turn out at least ten hydrogen fuel cell vehicles by the end of 2025 and set up an over 1,000-strong research and development and operations team to achieve these goals.

SAIC Maxus Automotive commercial vehicle development unit recently announced its first third-generation hydrogen fuel cell-powered model, the Maxus EUNIQ 7, which will accelerate its commercialization of hydrogen vehicles. The car refuels quickly, and its New European Driving Cycle has a range of 605 kilometers, the company said. The model’s fuel consumption per hundred kilometers is 1.18 kilograms, which breaks down to a mere CNY0.4 (5.9 US cents) per kilometer.

“Though constrained by infrastructure, hydrogen fuel vehicles’ use cost is controllable and they are feasible if applied to fixed routes or relatively closed application scenarios, such as sanitation and logistics vehicles,” an SAIC Maxus Automotive insider told Yicai Global.

SAIC Maxus also has amassed many technologies in the fuel-powered vehicle technology field. Before the release of the draft, the firm had produced more than 400 hydrogen fuel cell light buses for pilots in seven Chinese cities, including Shanghai. These have now notched up a total operating mileage of more than 4 million kilometers.

The city government is also providing policy support to promote hydrogen fuel vehicles. Shanghai plans to build about 20 filling stations for the gas in the city within three years and take the lead in commercializing the vehicles in China, according to a policy document the eastern financial hub released in May.