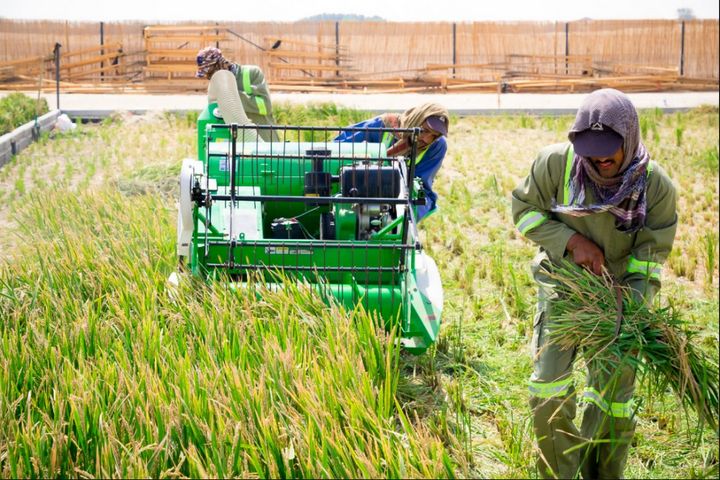 (Yicai Global) July 23 -- Scientists with East China's Qingdao Seawater Rice Research and Development Center, led by Yuan Longping, a member of the Chinese Academy of Engineering known in China as the 'Father of Hybrid Rice,' have achieved initial success with experiments to grow highly salt-tolerant 'seawater rice' in Dubai.

They will introduce the technology to more places in the city, which is the capital of the United Arab Emirates, and other parts of the Middle East and North Africa, the state People's Daily media reported.

The Qingdao R&D center and the UAE government plan to set up a 100-hectare seawater rice experiment farm next year under a framework agreement styled 'Green Dubai' signed by the center and Sheikh Mohammed bin Rashid Al Maktoum, the UAE's vice president and prime minister and Ruler of Dubai.

The project will go into commercial operation with the introduction of external investors, including China's Belt and Road sovereign funds.

Sheikh Mohammed's vision is that from 2020 onward the salt rice acreage will extend to cover over 10 percent of Dubai's total area, boosting food supplies for local residents as well as improving the ecosystem in the desert country.

The parties will also set up a local research center to introduce the grain strain to the entire Arab world while improving its ecosystem.

Sheikh Mohammed learned of the successful trial production of the salty rice in China in November, and his private office contacted Yuan's team shortly thereafter and invited them to experiment with the technology in the emirate's desert.

The group started their trials on Jan. 8, and had more than 80 rice varieties -- including the saltwater rice -- mature between May and this month. Five varieties delivered higher yields than the global average (4.539 tons per hectare), as production tests conducted by a joint international expert team on the first mature crop on May 26 demonstrated.