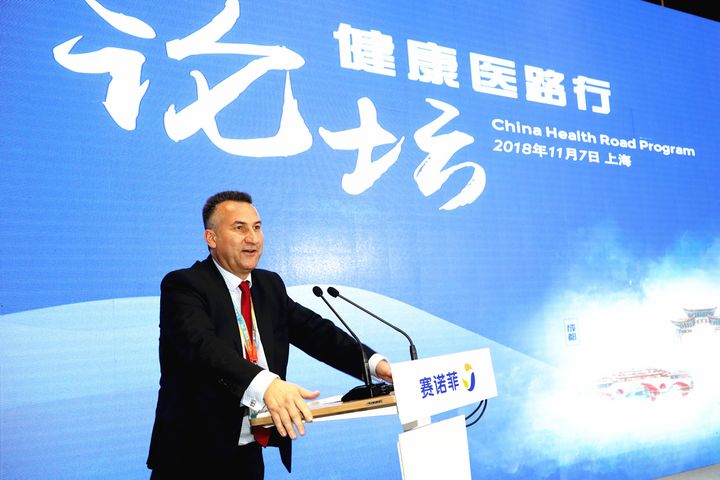 Sanofi to Bring Innovative Drugs to China as Soon as Possible

(Yicai Global) Nov. 8 -- Paris-based Sanofi, the world's leading healthcare company, said it will strive to introduce the innovative drugs and vaccines it exhibited at theChina Import Expo to the country as soon as possible.

The company will collaborate with its partners to allow these new drugs to benefit Chinese patients, with a focus on covering a large number of community health centers and county hospitals, as it delivers on its commitment to cater to the health needs of China's people, the pharmaceutical giant said in a press release at the first China Import Expo, which runs from Nov. 5 to Nov. 10 at Shanghai's National Convention & Exhibition Center.

Sanofi explained how the six innovative drugs and new vaccines it displayed at the expo were developed at today's China Health Road Symposium, a forum held during the CIIE. One of the 'behind-the-scenes stories' received significant attention: Aubagio, a new rare-disease drug, debuted just before the trade fair.

Aubagio is the first oral new drug for the treatment of multiple sclerosis in China. MS is a rare disease whose onset usually begins between 20 and 40. It is one and a half times to twice as common in women. It loads a heavy burden on patients and their families. It usually took years for an original new drug to go through all formalities for listing approval, until China included MS on its First List of Rare Diseases. Under the new policy it has now set a record for the fastest landing in China of a rare-disease drug.

"We sincerely appreciate the Chinese government's determination and efforts in accelerating patients' access to innovation drugs. We also want to pay tribute to all the involved stakeholders, in particular the medical experts, for their strong support and advocacy. The majority of patients with multiple sclerosis are young and middle-aged individuals. The disease casts heavy pressure on patients and their families. We will work with our partners to enable Aubagio to benefit patients as early as possible, because we know the earlier patients have access to Aubagio, the earlier they will receive treatment and relief for their disease," said Jean-Christophe Pointeau, country chair of Sanofi China.

Debuting these new drugs at the import exhibition is just the first step. At the symposium, Sanofi joined its partners in exploring how to enable medicines, vaccines and services to benefit Chinese patients, especially in a way that encompasses community health centers and county hospitals.

"Promoting the tiered diagnosis and treatment system is a top priority in China's ongoing healthcare reform. One important goal is to ensure rural residents can get their critical diseases treated within the counties where they live; 90 percent of all diseases should be controlled within counties," said Kong Lingzhi, vice president of the Chinese Preventive Medicine Association.

The association is helping county hospital presidents learn from each other's experience in healthcare reform, while amping up efforts to develop disease centers in such areas as chest pain and stroke, said Feng Shiqiang, vice director of the Association of China County Hospital Presidents.

China now has chest pain centers in thousands of county hospitals that form a national network of first aid and long-term disease management for sufferers. Patients now no longer need to go to hospitals in large cities, and the system has significantly shortened the time for receipt of higher efficiency treatment, thus lowering mortality and improving prognoses.

As the first multinational pharmaceutical company to elevate county-level primary healthcare through a dedicated primary care business unit in 2011, Sanofi is actively collaborating with industry societies and associations in a wide range of areas. One outstanding example is it teaming up with the Stroke Prevention Project Committee under the National Health Commission and the Association of China County Hospital Presidents to jointly build a national network for the prevention and control of strokes and chest pain.

Apart from building a presence in county-level hospitals, Sanofi is also paving a 'health road' in thousands of community health centers nationwide.

Prior to the import expo, Sanofi launched the China Health Road Program with the support of its headquarters. The program targets primary care in China, with a package plan to provide long-term training for general practitioners and unveils six projects.

"As one of the first multinational pharmaceutical companies in China, we have been devoted to bringing health to Chinese people over the past 36 years," Pointeau said, adding, "Sanofi greatly appreciates President Xi's confidence in bolstering opening-up and fostering collaboration at the CIIE opening ceremony. President Xi said that the Chinese economy is a sea. As the world's leading healthcare company and an outstanding corporate citizen, Sanofi, together with our 9,500 employees, will be dedicated to our mission and strive to safeguard the health of Chinese people," he pledged at the close of the symposium.