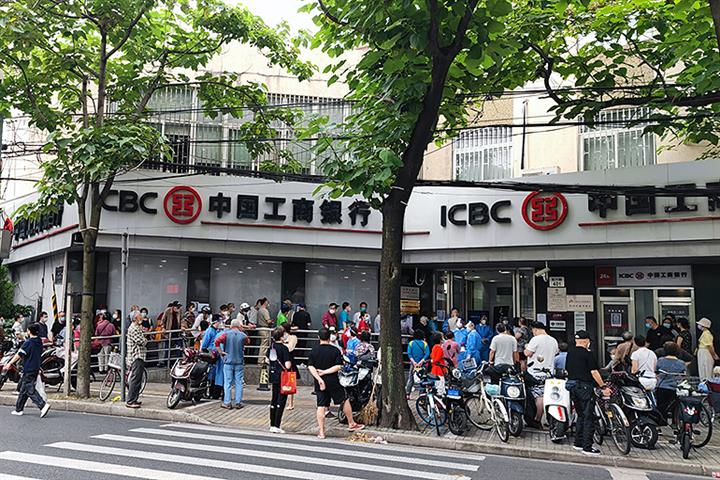 (Yicai Global) June 8 -- Many bank branches in Shanghai are prolonging their business hours to cope with a flood of customers after the city's two-month-long lockdown to battle an outbreak of Covid-19 was lifted last week, Shanghai Securities News reported yesterday.

The Industrial and Commercial Bank of China is extending the business hours of 20 of its Shanghai outlets to 6 p.m. between June 8 and June 12 to better meet clients' needs, a branch said on its WeChat account yesterday.

For the past week, between 200 and 300 people have been visiting the Postal Savings Bank of China in Pudong district, which normally serves 100 customers a day. Yesterday afternoon there were dozens of people, many of them elderly, lining up outside. Branch head Luo Jiongjiong pleaded with them to come another day as with only 15 staff members it would not be possible to serve all of them, even if they waited as late as 7 p.m.

"Our outlet reopened on June 1. People started to line up outside from 6 a.m. Many are senior citizens who need to deposit or withdraw money. Some even travelled from across town with more than 10 checks to deposit,” Luo said.

There are too many customers, and the waiting time is now as long as four hours, she said. Our staff also have to do regular disinfections and other work. We offer people drinking water and places to sit while they wait.

Cash withdrawals at the Bank of Shanghai were three times what they normally are on June 2. The lender is the largest pension issuer in Shanghai and distributes pensions to around one third of the city’s retirees. Most of the people visiting the bank are elderly people who wish to collect their pensions, said a staff member. The head office had to send more people to help us, he added.

But the long queues should ease soon, as more than 100 bank outlets have reopened. All the Shanghai branches of Bank of Nanjing, Bank of Shanghai, China Zheshang Bank and other lenders have resumed business.